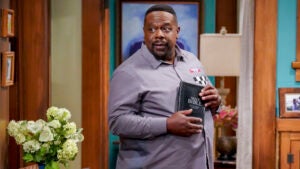 Hosted by Cedric The Entertainer, the 2021 show, which aired live from 8-11:15 p.m. ET, was up 16% in total viewers compared to last year. The 7.4 million total eyeballs tally means this year’s Emmys had the largest audience since the Sept. 17, 2018 show, which aired on NBC. The key demo rating for last night’s show is not yet available.

The 2020 event, which was emceed by Jimmy Kimmel and primarily a virtual affair due to the COVID-19 pandemic, drew a 1.2 rating in the adults 18-49 demographic and 6.1 million viewers in these comparable time-zone adjusted fast-national numbers, adjusting up in final Live + Same Day results to a 1.3 in 18-49 and 6.37 million viewers.

It’s important to note that the 7.4 million viewers for Sunday’s show does not include out-of-home viewing and will likely increase in its final count to 7.9 million when those numbers are released by Nielsen Tuesday.

Last year’s Primetime Emmy Awards were down just 8% from 2019’s 6.949 million, when the special aired on Fox. That’s pretty darn good considering how much other major awards shows have declined recently.

The Emmys are not immune to large declines. The big year-to-year drop from the Television Academy’s primo show came from that Fox year, when the Emmys sank 32% from NBC’s turn in 2018, which drew 10.224 million total viewers. (It’s worth pointing out here that the Emmys, which air in September, have traditionally been much lower-rated than other majors awards shows like the Golden Globes, Grammys and Oscars.) 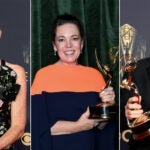 The last time CBS had the Emmys, in 2017, the best-of-TV celebration drew 11.394 million overall viewers.

You can find all of Sunday’s winners here. The short version: “The Crown” completely dominated in drama series, “Ted Lasso” and “Hacks” conquered comedy, and “Mare of Easttown” and “The Queen’s Gambit” were the stars of the limited series category.

Cedric The Entertainer emceed the show from the Event Deck at L.A. Live, rather than the Emmys’ previous home at the Microsoft Theater, with a limited number of guests in attendance, versus last year when all of the winners and nominees participated from home.