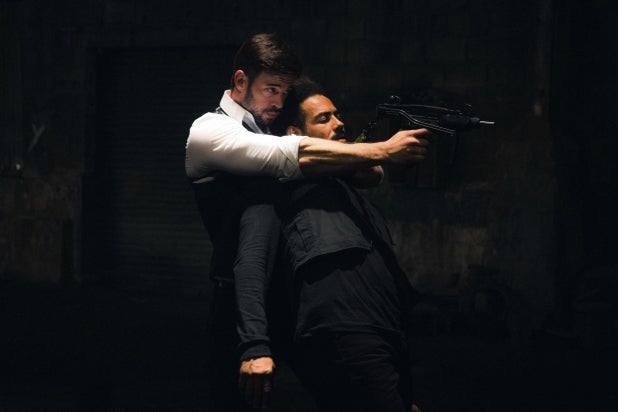 In the early aughts, Cuban actor William Levy burst onto the telenovela scene, quickly amassing a fan base among women viewers. Since then, the actor and model has gone on to movies, English-language TV shows and even a season of “Dancing with the Stars.”

It helps to understand his previous work as a perennial thirst trap and overall handsome man to appreciate his turn into a steely gun-for-hire in Matías Moltrasio’s “En Brazos de un Asesino” (“In the Arms of an Assassin”).

Levy plays the titular assassin, Victor, and the movie wastes no time getting him in front of the camera. Quickly, we see him violently set up a contract with a drug lord named Guzman — not to be confused with “El Chapo” Guzman, or should he be? On Victor’s way out of the kingpin’s mansion, he realizes he’s picked up a stowaway, Sarai (Alicia Sanz, “Shots Fired”), too late. He feels for her desperate attempt to escape the cruelty and violence that has fallen on her shoulders as Guzman’s main girl. But aiding in her escape unleashes a bevy of unintended consequences for both Victor and Sarai.

Not only is Levy the star of this movie, he’s also one of its producers and writers, working with producer Jeff Goldberg to adapt J.A. Redmerski’s thriller “Killing Sarai” into “En Brazos de un Asesino.” There are hints near the movie’s end that there may be a sequel in store, but that feels like a big leap of faith for anyone who’s just watched the film. It’s terribly predictable and suffers from a rare case of too much plot and not enough connections between plot points to straighten out the story’s copious details.

It’s easy to get confused when things are only half-explained, like when a mysteriously generic group only referred to as “the Order” appears to have a big effect on the characters late in the movie. Along the way, there are a few surprises and many more unpleasant clichés. We get some truly dreadful lines of dialogue, like when Victor compliments Sarai on her basic piano skills and tells her she should look into going pro. If it was supposed to be a joke, Levy doesn’t sell it as such, and it’s just another bad moment in the movie.

Unfortunately, Levy doesn’t quite master the reluctant, soulful attitudes of other assassins/spies with a soft side, like John Wick, James Bond or the established killer in “Léon: The Professional.” He seems too emotionally detached to sympathize fully with a young woman trying to escape what she describes as slavery. Yet, he’s also noble to a fault, almost laughably so, like when it comes to killing henchmen but making sure not to hit any women unless they also try to kill him.

That nobility takes a side-step when it suits his needs, like using Sarai as a means to lure in another target or tying her up and keeping her uninformed of what he’s going to do. There’s a fair bit of tying people up, strip searches and bad movie sex, set to really even worse music, not to mention flashbacks to a traumatic rape scene.

Moltrasio’s feature debut feels less polished than its leading man. Cinematographer Sebastian Cabrera Chelin offers a few moments of inspired lighting and staging, but for the most part, the movie feels as if Moltrasio is still getting used to working with a camera. Some shots are too distant from the characters, revealing the cheapness of sets, and other shots betray how few extras are there in the scenes. The action sequences can be so messy that information about who’s punching whom or shooting what gets lost in the crosscuts.

Moltrasio also handles the movie’s editing, which feels just as inexperienced as his direction. There are many fade-to-black cuts and a number of shots that feel like they could be cut quicker. Then there are the things I just cannot explain, like an “Eyes Wide Shut”-style party, complete with topless models and blindfolds in place of masks for little reason, and references to literary names like Vonnegut and Faust that serve no apparent purpose. In one scene, Sarai has a self-defeating victim-blaming monologue that feels quite egregious, almost offensive in its insensitivity at what that character might be going through.

“En Brazos de un Asesino” is not self-aware enough to have a good laugh at its self-seriousness, even as supporting characters and extras don’t seem to know how to react to painful gunshot wounds or whenever the camera accidentally reveals the film’s budget constraints. The movie’s few bright spots feel unintentional, like mistakes left in because no one else noticed the absurdity of some scenes or the comic potential in others.

It seems like a wild misstep to keep Levy from doing what he does best — turning on the charm — so he can play a dispassionately stoic figure. Oh well, at least Levy gets to live out his hero fantasy of playing a cold-blooded assassin. The question now is if that’s how audiences will want to see him.