“Encounter” star Riz Ahmed says he was drawn to Michael Pearce’s film because he wanted to add an “extra layer” to the portrayal of an American marine who might not “look like” him.

“I think the script in its original form was conceived for a different kind of actor than perhaps someone like me, because in a nutshell when you think of an American marine, you might not initially think of an actor who looks like me,” Ahmed said in a virtual interview with TheWrap editor-in-chief Sharon Waxman during the Toronto International Film Festival. “So I put my hand up for it and I said, listen, this could add an extra layer to the story, and Michael was very receptive… but that’s why I was kinda chasing it. This is an opportunity to do something really fresh with a film that’s already really fresh.”

He added: “And that’s why you ended up with a movie like this, with a cast like this — you don’t often see those two things together. The American military and all militaries are a lot more diverse than maybe we realize and a lot of people who feel like outsiders, understandably, they wrap themselves in the flag and in the uniform to feel like they’re part of a family, and that works for a lot of people. But some people, when they come back, they feel like that family didn’t give them what they were looking for or that experience left them with more scars rather than healing them. Being from a minority can make you feel even more of an outsider to that experience. It kind of added some stakes and depth to the story.” 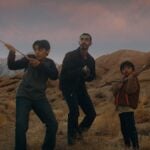 The movie follows two brothers that embark on a journey with their father who is trying to protect them from an alien threat. Ahmed plays Marine Corps veteran Malik Kahn.