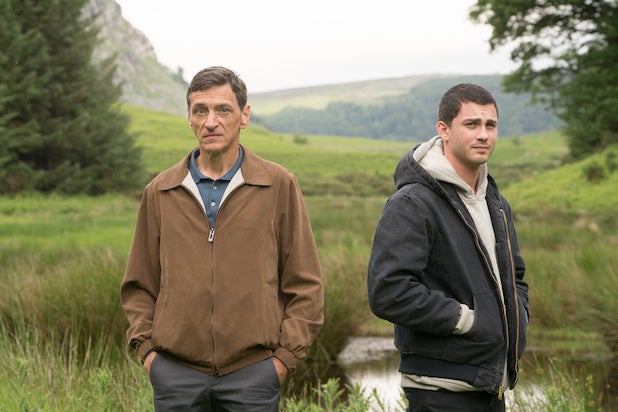 The phrase “It’s not the destination, it’s the journey,” which has often (and perhaps erroneously) been attributed to American writer Ralph Waldo Emerson, was a familiar saying by about 1920. And it makes perfect sense that the phrase roughly coincides with the dawn of cinema, because filmmakers have been cinematically paraphrasing it for much of the last 100 years.

The latest example is “End of Sentence,” a road movie from first-time Icelandic feature director Elfar Adalsteins. The film drops John Hawkes and Logan Lerman in the northwest of Ireland for a father-son adventure that suggests that it’s not the journey or the destination – it’s the travelers who are on that road.

That’s because Hawkes and Lerman are subtle, naturalistic performers who spin gold out of settings that could easily seem clichéd. You pretty much know that these guys are on the road to understanding, acceptance and reconciliation, but they fill in the details so quietly and surely that the deep ruts put in this road by a thousand other movies barely matter.

In the film, which lost its theatrical release because of the pandemic but will premiere on VOD on May 29, Hawkes plays Frank Fogle, a soft-spoken man who walks the line between politeness and timidity. In the opening scene, Frank and his wife, Anna, visit their son, Sean (Lerman), in an Alabama prison – but while Sean will see Anna, who is dying of cancer, he refuses to have anything to do with his father.

When Sean is released from prison after his mother’s death, he continues to rebuff his father, even when Frank tells him that Anna’s last wish was that her husband and son sprinkle her ashes on a lake in Ireland, where she’s from. Of course, there wouldn’t be a movie unless Sean changes his mind, so he does, and in short order father and son are heading for Donegal and parts beyond.

The trip is supposed to be a quick one, but road movies don’t do quick ‘n’ easy. A local girl played by Sarah Bolger catches Sean’s eye and complicates things, and the resentments and wounds that father and son carry threaten to upend the already tense relationship at every moment.

We’re used to seeing Hawkes with a lot of edge than this through his performances in “Winter’s Bone,” “Martha Marcy May Marlene,” “Deadwood” and “Three Billboards Outside Ebbing, Missouri,” but Frank is the furthest thing from edgy; he’s too timid to send back a fast-food burger that was made incorrectly, so meek that his motto is, “Sometimes you’re the pigeon, sometimes you’re the statue. That’s life.” Frank is always the statue, and Hawkes makes you feel for him even before you find out how he was beaten down to be what he is.

Sean, on the other hand, is a hothead, all volatility and deep reservoirs of anger that come from the feeling that his father never protected him from a physically abusive grandfather.

The spectacular Irish countryside is glimpsed along the way, but what’s important is what’s going on inside the car, not outside it. And old Irish songs are threaded through the narrative – “Dirty Old Town” in a lovely pub scene, snippets of the ballads “Spancil Hill” and “Red Rose Café” later, a verse of the haunting benediction “The Parting Glass” heard faintly in a restaurant – but again, the point is not to highlight the Irishness of it all, but to place the internal journey in a specific physical setting.

Adalsteins and his actors use the first part of the film to lay back and sketch this relationship in a quiet and undeniably affecting way; things rev up in the second half (including a slapsticky chase scene that feels a little silly and more than a little out of place), but Hawkes and Lerman are a pleasure to watch as they ease on down this road.

“End of Sentence” is available on-demand May 29.