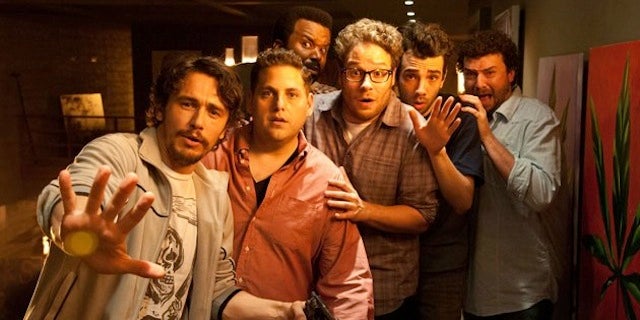 If Hollywood loves anything more than destroying the planet on screen, it’s making fun of itself, and Seth Rogen (with his “Superbad” and “Pineapple Express” writing partner Evan Goldberg) gets all the mileage he can out of both in “This Is the End.”

It's a hilariously raunchy look at a house full of contemporary comedy superstars who are thoroughly unequipped to cope when the Four Horsemen of the Apocalypse come a-knocking.

Horror-comedy can be a tricky mix to pull off — we won’t take the terrifying situation seriously if it’s played too much for laughs, and we won’t be amused if things get too scary — but Rogen and Goldberg (making their directorial debuts) get the balance just right, with one gut-busting punchline and situation after another set against the escalating dread of the end of existence, taking place just outside of James Franco’s house. Also read: 'Man of Steel' Review: This Grimmer 'Superman" Might Not Soar, but It Flies'

In the movie’s universe, Baruchel is one of Rogen’s old Canadian buddies, and he’s never quite jelled with his friend’s new Hollywood posse, namely Franco, Jonah Hill and Craig Robinson.

It’s that quintet, however, who manage to survive Franco’s party after the hills catch fire, random citizens get pulled into the sky by a blue light and a giant sinkhole forms in the front yard. (The stars who get killed off early in the film — this might count as a spoiler, but hey, it’s in the trailer — include Jason Segel, Mindy Kaling, Rihanna, Christopher Mintz-Plasse, David Krumholtz, Kevin Hart, Martin Starr, Aziz Ansari and Michael Cera, the latter playing himself as a creepy, coked-up sex fiend.)

Also read: 'Man of Steel' Reviews: Is This the Best Superman Movie Ever?

Their meager food supply is mostly depleted the following morning by Danny McBride, who awakes from a hangover unaware of the cataclysm and consumes nearly all of it for breakfast. As the ordeal continues, personality clashes surface — Franco hates McBride, Baruchel is keeping secrets from Rogen, Hill stops being particularly nice — and these pampered man-boys have to figure out how to persevere once they run out of water (and pot).

Rogen and Goldberg treat the end of the world with the respect that it’s due, pushing their story to the limit and even daring to explore the deeper issues involved in the End of Days in a way that, say, religious-minded movies like “Left Behind” or “The Omega Code” haven’t tackled nearly as interestingly.

None of the actors let their on-screen surrogates off the hook, either; they’re all portrayed as venal and selfish pre-apocalypse, bringing those traits even more to the forefront when they’re all desperately fighting for survival. (There’s also a lot of mockery of their own careers, with “Your Highness” and “The Green Hornet,” among others, becoming targets for jokes.)

The film’s humor trades very much in the R-rated raunch that fans of these writers and these performers have come to expect, with large dollops of the post-panic jokes about man-on-man sex and male nudity that have become the trademarks of the Judd Apatow bromantic comedies.

If the prospect of this ensemble thrills you, you’ll get what you want out of “This Is the End,” but if you didn’t like them before, this it probably won’t change your mind. The film’s one flaw feels Apatovian as well — it’s got an extra 10-15 minutes that could easily have been trimmed — but even though the film sags a bit, it never grinds to a halt.

Perhaps the biggest gambit that “This Is the End” has up its sleeve is to sneak a message about morality and generosity into a show-biz satire-cum-disaster movie. Thanks to their audacity, Rogen and Goldberg bring us the end of the world with a bang, not a whimper.