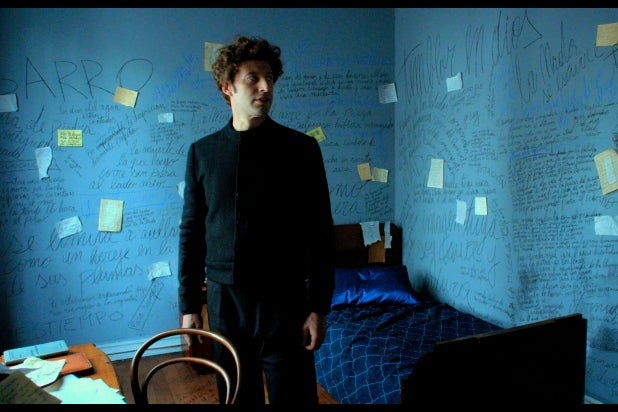 “I’ll save Surrealism!” is the sort of brash artistic mission statement only uttered by the young, usually in the first flush of self-regard, adult possibility and creative power. And it’s there that we reunite with fledgling poet and future cult filmmaking legend Alejandro Jodorowsky (played by his adult son, Adan Jodorowsky), in the director’s latest look back at his own life, the wonderfully strange “Endless Poetry.”

Having explored his lonely childhood in 2013’s “The Dance of Reality,” Jodorowsky has much more to say on the subject of building a life in art. This new chapter involves teenage Alejandro (Jeremias Herskovitz) leaving boyhood and becoming an appropriately angry young man, splintering his relationship with his dutiful yet weepily dramatic and literally operatic mother (Chilean soprano Pamela Flores, who sings all her character’s dialogue), as well as with his domineering, unusually cruel father Jaime (Brontis Jodorowsky — Adan’s older brother, who was the young co-star of their father’s 1970 classic “El Topo”), all in the pursuit of personal and artistic freedom.

Alejandro’s vow to himself is to become a successful, important poet, and nothing is going to get in his way. This means denying his father’s demands to stay home and work in the family’s general store. It also means shaking free of Dad’s vise-like psychological hold. In one sequence, father and teenage Alejandro brawl during an earthquake, in another, the defiant adolescent recites the poetry of Federico García Lorca out loud — a habit the patriarch despises and forbids — while a vision of Jaime’s enormous, disembodied head floats nearby, angrily shouting an abusive gay slur.

Young adult Alejandro leaves home and falls in with a community of artists who will become his friends, lovers, and rivals, Chilean poet Enrique Lihn (Leandro Taub) among them. Described as “super-tenors”, “ultra-pianists,” “poly-painters,” and “symbiotic dancers,” it’s a bohemian Modernist clubhouse of misfits and strivers, the sort of comrades whose intensity requires a complementary, oppositional energy from every other member of the group.

Alejandro further sets out to locate his muse. Into a bar staffed with old men dressed in black walks poet Stella Diaz (Flores again, in a dual role), who appears to have been beamed in from the future, an almost proto-punk rock figure in extreme makeup and bright red wig. She barks, “Ustedes son nada!” (“You people are nothing!”) at no one in particular, and it’s hormonal and literary friction at first sight. It’s also a recipe for histrionics and disaster, the twenty-something carousel of sex and rage, drunkenness and inspiration, wheel-spinning and frustrated ambition that often pours the foundation of a lifetime devoted to art.

The character of “Pierrot” — a sad, pantomime clown dating back to the 17th century — darts in and out of the action, a stand-in for Jodorowsky’s self-perception (at one point he gets a job in a circus as a clown who farts for laughs), the holy fool at the center of an absurd life. Meanwhile, recurring elements from Jodorowsky’s most famous films, “El Topo” and “The Holy Mountain,” emerge to point the young artist toward his own poetic destiny.

Parental bonds are destroyed and religion’s shackles broken; literal fires consume the past; sex and blood and cruelty form complicated bonds; demons and death conduct a fantasy street parade; and broken friendships shake Alejandro loose of his home so that he can, finally, leave everything behind. (Specifics: boat to France. Agenda: saving Surrealism.)

The filmmaker’s outsize, and sometimes unnerving, stylistic choices jump into the frame and vanish just as quickly. Set facades, including a caricature of a steam locomotive, are shown being put into place by silent extras. Some of those helpers are covered in head-to-toe in black body stockings, and they hand props to actors from scene to scene. Naked bodies figure just as prominently, in the service of both visual shock and emotional tenderness. Blank masks, clown shoes, and dancing skeletons turn humans into props themselves.

And narrating it all is the director, appearing on camera to guide, hover, and, most poignantly, comfort his characters, as he redirects focus to his most pressing concerns, aging and forgiveness. “Old age is not a humiliation,” he announces with the authority only an 88-year-old can earn, describing the detachment and understanding of humanity that stretching into one’s ninth decade affords.

That also means, inevitably, understanding and absolving the father he grew to hate. And as a restless son, leaving for Europe for good, delivers an angry goodbye to an uncomprehending father, Jodorowsky stands by, seemingly grateful for the pain, explaining, “By not loving me, you taught me that love is an absolute.” It’s the end, but the effect is that of an enticing prologue to a story that seems to have only just begun.