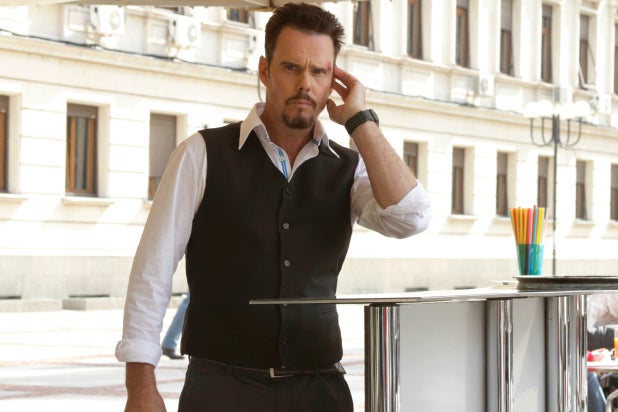 When streaming site Crackle’s parent company Sony was hacked at the end of 2014, actor Kevin Dillon worried that comedic international spy thriller “The Throwaways” would never see the light of day.

“They said, ‘Hold your horses, we’re not doing any interviews — they might push it.’ And of course they did,” Dillon told TheWrap of making press appearances for the film’s original Dec. 19 premiere date. “I didn’t know how long they were going to push it for, so I was afraid that it would take a year or two.”

At the time, when TheWrap exclusively reported that the film was shelved, it didn’t seem very promising that it would come out the following month, but Crackle will release the film on Friday.

“The Throwaways,” which counts Jeremy Renner among its executive producers, follows notorious hacker Drew Reynolds (Sam Huntington), who is captured by the CIA and given a proposition — work for them or spend the rest of his life in prison. Reynolds agrees to join on the condition that he gets to choose his own team. Instead of picking from the top agents the CIA recommends, Reynolds goes with a group of “throwaways,” those deemed expendable and seemingly the worst in the organization.

One of those is Dillon, who plays legend-in-his-own-mind special forces soldier Dan Fisher. The “hot-headed, battle-hungry” veteran — as the man behind the character described him — is put on a team set up to fail. Together, however, the squad outperforms their unfair individual reputations.

Speaking on the weird situation that he, his fellow cast members — including James Caan — and all of Sony found themselves in last month, Dillon said he understood the gag order placed upon them by Crackle’s parent corporation, but said had he been in charge, he would have gone through with the interviews at the time, capitalizing on the trending topic and irony. After all, look what the controversy did for Sony’s “The Interview.”

“You get lucky,” the optimist told us of the coincidence the little movie suddenly found itself in the middle of. “They stepped in it.”

While Dillon was happy for Crackle afterward, he wasn’t originally thrilled about the prospect of doing something on Crackle. It took a little convincing for him to want to play a soldier on a platform most known for Jerry Seinfeld shooting the breeze with comedians over coffee in vintage cars, the actor told us.

“I originally thought, ‘Well I don’t think that’s something I want to do,'” Dillon admitted, hemming and hawing over the network’s modest size. “I had my people at ICM and my manager tell me, ‘Listen, this is kind of the wave of the future — this is where it’s all going.'”

Plus, “It’s kind of nice to be part of this early digital network, it’s just another way to get films out, more production out there, more work for actors, more work for writers and crew members,” Dillon realized. “TV has gotten real bad with all the reality stuff. We needed another outlet and this is perfect for it.”

On a potential sequel to the film iteration of the Mark Wahlberg-inspired and-produced project, the man behind Johnny “Drama” Chase told us there’s a “really good chance,” supposing the first one does well — which Dillon thinks it will.

“I think it’s a really good movie, from what I’ve seen it looks great,” he commented.

Fans will find out on June 5, when Adrien Grenier’s 1966 Lincoln Continental Convertible packed with his Queens Boulevard buddies rolls into theaters.

Loyal fans have endured a long wait for the film; the HBO series concluded in 2011, and even before then there were talks of a movie version.

For his part, Dillon has no real explanation on what took so long — he’s just glad it’s happened at all.