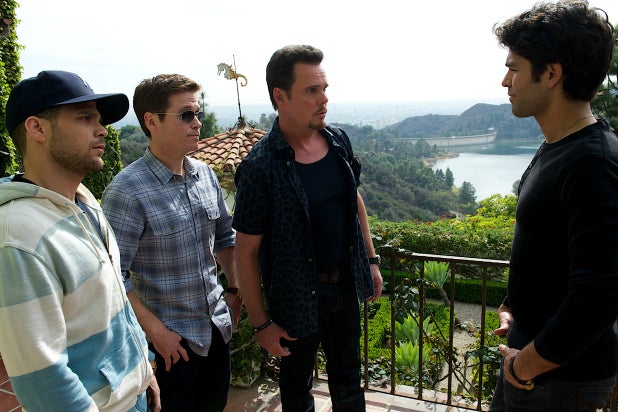 TheWrap offers two takes on “Entourage” the movie: one from its Lead Movie Critic Alonso Duralde, who has never watched the TV show, and another from its Emmy mag editor Tim Appelo, a longtime fan.

‘Entourage’ Review: and the Boys Are Back, and They’re Obnoxious

If you’ve never seen the long-gone HBO series, you may wonder why you’re supposed to care about any of these entitled Hollywood jerks
By Alonso Duralde

Having never watched an episode of the HBO series, I was surprised to find that my favorite character in the “Entourage” movie was Travis, the rich Texan blowhard portrayed by Haley Joel Osment. Travis is the film’s one unlikable character who’s creepy, conniving, entitled, obnoxious and a total pig.

All the other creepy, conniving, entitled, obnoxious total pigs in the movie are apparently supposed to be the heroes.

“Entourage” comes to celebrate the privileges of being white, male, wealthy and famous, not to bury them. While there’s nothing wrong with creating a little vicarious wish fulfillment for people who dream of living La Vida Hollywood, it would have been nice if writer-director (and show creator) Doug Ellin had given the movie as many funny lines as there are opening credits for himself. (I counted four.)

For all its Tinseltown gloss and hot cars and swimsuit-clad female extras and name-dropping and pointless celebrity cameos — apparently the ingredients that kept the TV show on the air for eight seasons — “Entourage” is never particularly amusing, nor does it take the characters anywhere new or interesting.

Say what you will about the “Sex and the City” or “Veronica Mars” movies, but they at least acknowledged the passing of time and allowed for changes in people’s lives.

“Entourage,” like “Paul Blart Mall Cop 2,” opens by unraveling its own previous happy endings: Movie star Vincent Chase (Adrian Grenier) has annulled his marriage after nine days, and Vincent’s former agent Ari (Jeremy Piven) is pulling the plug on his Italian retirement and eagerly returning to Los Angeles to become a studio chief. Ari has a project that he thinks would be perfect for Vinny, who counter-offers that in addition to starring, he wants to direct.

Cut to several months later, when Vinny and his producer and best friend, E (Kevin Connolly), have gone over budget and are going back to Ari for more postproduction money, which means Ari has to go begging to studio backer and Texas gajillionaire Larsen McCredle (Billy Bob Thornton) for cash. Larsen agrees only if his son Travis (Osment) can accompany Ari back to Hollywood to learn more about the picture business.

Will Vinny get the money to finish his movie? Will E stop sleeping with random women and get back together with his pregnant ex, Sloane (Emmanuelle Chriqui)? Will Vinny’s second-banana half-brother, Johnny Drama (Kevin Dillon), get cut out of Vinny’s movie? And will their buddy Turtle (Jerry Ferrara) manage to convince UFC fighter Ronda Rousey (charming and charismatic, playing herself) that his interest in her is personal and not merely professional?

“Entourage” makes it exceedingly difficult to care about any of these dilemmas, mainly because the four leads are thoughtless clods whom we’re supposed to find endearing because they’re living the dream. Piven’s Ari is so over-the-top in his narcissism and megalomania that he’s fun to watch, but the other lead characters are the kind of bros who should be having drinks thrown in their faces on a regular basis.

Ellin has to wedge in a bunch of celebrity cameos that never amount to anything: Armie Hammer threatens Vinny at Bouchon because Vinny is dating Hammer’s ex (Emily Ratajkowski as herself), for instance, but then nothing comes of it, and series executive producer Mark Wahlberg shows up with his own real-life entourage who inspired the show in the first place for a completely useless scene.

After a while, the crossover between fiction and reality gets muddled, as when Johnny Drama goes to an audition and reads for Richard Schiff and Judy Greer; it took me a while to figure out that Schiff was playing Schiff while Greer was playing a casting director and not herself, despite the fact that she’s as famous as many of the male celebs in the movie who are doing winking walk-ons.

In this movie’s world, women exist almost exclusively to have babies and/or make problems. Two women lie to E about STDs and pregnancy, ostensibly to teach him a lesson, but the underlying premise is that women will make stuff up to ruin your life when they’re not actively ruining your life for real.

Blissfully, “Entourage” isn’t nearly as long as “Sex and the City 2,” and fans of the show may well enjoy the opportunity to spend more time with these cads. For someone who never watched the TV version, the movie feels like a justification of that choice.

“Entourage” Viewer Review: Even For Fans, The Bloom is Off the Bros

The critics have spoken: the movie version of onetime HBO hit “Entourage” is perceived as a sunken yacht, an empty piñata, a “Dumb insulting misogynist outrageously bad film,” as my former editor Judith Regan posted on Rotten Tomatoes.

This is painful for a longtime fan to admit. Others wondered why the show about four Hollywood bros and their excitable agent lasted eight seasons; for us addicts, every episode was as necessary as a new pair of Choos to a Carrie Bradshaw fan.

I will insist that, as I heard two people in separate groups exclaim defensively to skeptical friends while filing out of a Wednesday screening, “It wasn’t THAT bad! It was good … kind of good!” To see the guys back in action definitely has its guilty pleasures. But despite many moments of nostalgic fun around the pool, I have to concede the haters have a point. What went wrong in the transition from TV to cineplex?

First, 30 minutes is “Entourage’s” natural habitat. Episodes zip by like a water skeeter or a Quaalude buzz. At 104 minutes, the movie portrayal is a water skeeter wearing Doc Martens on every leg. When a celeb guests on the show, they get a juicy scene or even an arc, like Andrew Dice Clay. Here, Clay is just one of dozens of famous faces that pop up and say something fast and forced: Jessica Alba, Warren Buffett, Mark Cuban — whoever, whatever.

Ari (Jeremy Piven) erupts once more into sweaty, terrified rage, making noises like a car with the brake and accelerator both punched to the floor, and Drama (Kevin Dillon) is up to his old entertaining tricks as well, but everybody else is up to not nearly enough. Vinny’s $100 million-and-counting film “Hyde” doesn’t involve us the way the travails of “Aquaman” did on the show; it feels less like a movie-within-a-movie than just a stale MacGuffin. The inside-showbiz satire isn’t as light on its feet as it used to be. E’s romantic roundelay is lame, overcomplicated and underbaked. Vinny, a vague character at best, has become an affable, grinning zombie: not much upstairs — but what a lovely staircase.

Worse, Turtle (Jerry Ferrara) is a shadow of his former self. A Turtle who is not fat, except financially, is no Turtle at all. The whole point of him on the show was to offer a more attractive and well-adjusted version of failure than Drama’s, and then startle everyone by succeeding. Now that he’s won, Turtle is done. Who needs him anymore when he’s not a lovable loser? As a winner, he’s a lost cause.

The very worst thing about “Entourage” the film, however, is the women in it. I never thought I’d say this, but I long for the relatively feminist world of “Entourage” the TV show. Sometimes, women on the show evinced motives and moxie while straining the fabric of a wild bikini. Perrey Reeves is as good as ever as Mrs. Ari, the only woman who could take her husband on and win (though like most players in this appallingly overpopulated movie, she doesn’t get enough time to do it).

For the most part, the movie is way meaner to its women than the show ever was. There’s a line that goes something like, “Fun is when you f–k a girl and forget her name while you’re f–king her.” That attitude was expressed with a lighter touch on the show — it was funny and, in a disgusting male-wish-fulfillment way, fun. But here, it comes off as crude, cruel and uncool. Director Doug Ellin may have dialed up the sex to 11 to score at the box office, but wound up turning sexiness into nothingness.

Of course, nothing was what always happened on “Entourage.” It was our own little Lost Weekend every week. A little bit of that buzz creeps into the film from time to time: “Entourage” is almost as good as the first “Sex and the City” film and infinitely better than the second (which has a Rotten Tomatoes rating half that of “Entourage”). But the laughs aren’t thigh-slappers, and the buzz wears off before the next good gag or scene. “Entourage” newbies won’t get the references to setups from the show, and fans will find them familiar and thin, like a teabag dipped once too often.

If “Entourage” were a joint, it would be mostly oregano. The old Turtle — the one with the munchies — would never stand for that. Now he just doesn’t seem hungry at all anymore.