A feature film sequel to the animated French family hit “Ernest & Celestine” is coming soon, and Studiocanal has revealed a first look at the film along with new details ahead of launching worldwide sales on the movie.

“Ernest & Celestine 2: A Trip to Gibberitia” is a sequel to the Oscar-nominated 2012 film, which picked up six Annie Award nominations and won a prize at the Cannes Film Festival. Though the sequel was first announced as far back as 2017 in France, with production beginning in May 2020, the film is finally close to completion, and Studiocanal plans to release it in France on December 14, 2022.

The distributor will also be launching worldwide sales on the title (excluding France, Poland and Scandinavia) at the European Film Market. 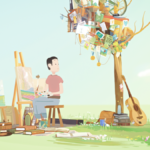 Also Read:
‘Namoo’ Tells a Story of Love That Erick Oh Waited a Decade to Tell

The original film is based on a series of books and tells the story of the unlikely friendship between a bear named Ernest and a mouse named Celestine, who go on the run from authorities after it’s deemed that bears and mice must be mortal enemies and cannot be friends.

The new film, “A Trip to Gibberitia” (“Le Voyage en Charabie”), is an original story from Guillaume Mautalent and Sebastien Oursel, though it is still based on the IP and characters of the original books. It’s described as a new adventure that takes Ernest and Celestine back to Ernest’s country, Gibberitia, to fix his broken violin. This exotic land is home to the best musicians on earth and music constantly fills the air with joy. However, upon arriving, our two heroes discover that all forms of music have been banned there for many years – and for them, a life without music is unthinkable. Along with their friends and a mysterious masked outlaw, Ernest and Celestine must try their best to bring music and happiness back to the land of bears. 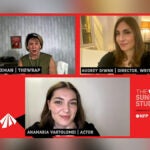 The original film was released in French, followed by an English-language release by GKIDS that featured the voice talent of Forest Whitaker and Mackenzie Foy.

Studiocanal at EFM is also launching sales on two other titles, including “One Year, One Night” from director Isaki Lacuesta and “This One Summer” from director Éric Lartigau.

See the first look image from “Ernest & Celestine 2: A Trip to Gibberitia” above.