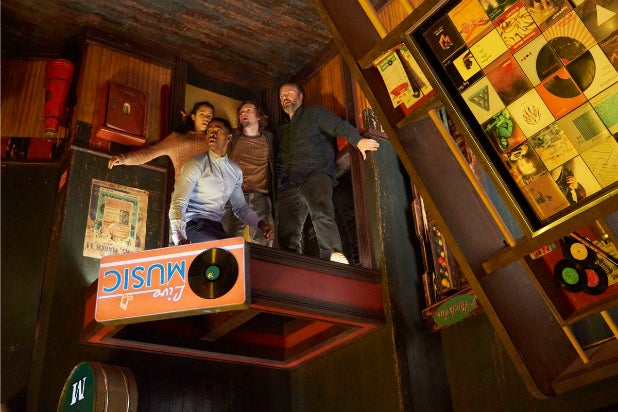 “Escape Room” filmmaker Adam Robitel has carved out a funny little niche for himself as the director of the first wide-release movie of the new year, two years running. Robitel rang in 2018 with “Insidious: The Last Key,” a functional but forgettable shocker in the “Insidious” franchise. Which was, in retrospect, perfectly fitting for a disturbing year, one that we somehow managed to collectively get through but which many of us would prefer never to talk about again. Maybe he was onto something.

Here’s the good news: “Escape Room,” Robitel’s latest New Year’s gift to the world, is a definite improvement. This gimmicky William Castle-inspired thriller is 10 pounds of silly in a five-pound bag, but you know that going in. It’s a movie about escape rooms that literally kill you, and if you’re willing to buy into that premise, it’s about as good as a movie with that premise could probably be. So, hey, 2019 is looking up.

“Escape Room” stars an eclectic cast of characters, each of whom receives a mysterious invitation to try out a brand-new, “escape room” experience. For those who don’t know, the movie will explain it to you (probably more than necessary), but suffice it to say “escape rooms” are a group activity where you and a group of other people are locked in a room, and you can’t get out unless you solve a puzzle by searching your surroundings for clues, which range from simple to clever to frustratingly esoteric.

Watch Video: Ariana Grande Freaks Out Over and Over in a Haunted Escape Room With James Corden

Once they’re in the escape room, and once they realize their lives are at stake, they frantically search for clues, make disturbing realizations about one another, and generally follow the same overall structure from Vincenzo Natali’s low-budget 1997 sci-fi thriller “Cube.” Survive one deadly room, go to the next, lose a member of your team every 10 minutes or so in a tragic but awesome kill sequence, rinse, repeat.

It’s a formula, but it works if you can keep the audience’s interest. The makers of “Escape Room” deserve a lot of credit for making all the actual escape rooms varied and intriguing. The cast ventures from a chamber that’s built like a giant oven to an indoor mountain range where they’re going to freeze to death. Another room is built like an upside-down pool hall, forcing them to solve puzzles while hanging on for dear life and listening to Petula Clark’s “Downtown” at full blast, which is skipping on the jukebox. (It’s one thing to die in a cruel and deadly game, but the thought of dying while annoyed is, admittedly, genuinely scary.) Every set piece is visually distinctive and filled with detail, and it almost — almost — makes you want to play along.

The spry script by Bragi Schut (“Threshold”) and Maria Melnik (“American Gods”) keeps the action moving fast enough that you hardly notice just how cookie-cutter the characters are and how utterly absurd the premise is. And all the credit in the world goes to the film’s cast for fully committing to the reality of a fundamentally unrealistic motion picture. It doesn’t matter that it would take billions of dollars and a massive workforce to make this totally secret experiment even half this good; what matters is that we’re in the thick of it, right now, so we might as well accept the situation and make the most of it.

“Escape Room” is gimmicky and simplistic, but there’s no sense in complaining about that. That is, after all, why we bought our tickets. (The experience brings to mind Bill Watterson’s childhood id personified, Calvin, running up to his television set, turning it on and cheerfully demanding, “Pander to me!”) We asked to sit in this room with 100 minutes of escapism, and “Escape Room,” in an impressive display of truth in advertising, gives it to us, with a little bit more panache than we were probably expecting.

In other words, Adam Robitel’s film makes the most of a bad setup and emerges mostly victorious by the end. So, if The Robitel Theorem holds, this may just mean that 2019 is going to turn out, if not necessarily great, then at least a little better than it started. Happy New Year, indeed.