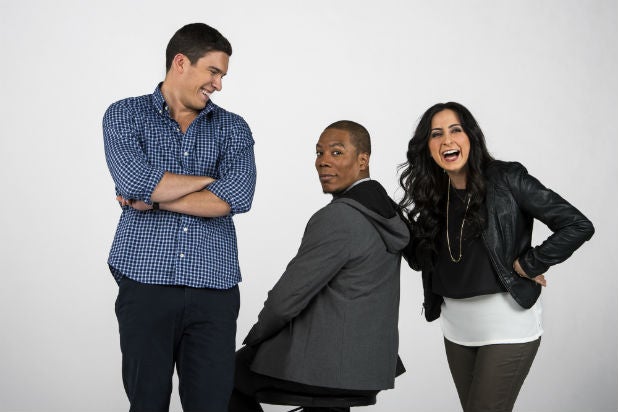 ESPN is bringing some young, fresh faces to its “SportsCenter” team.

Will Reeve, son of late “Superman” star Christopher Reeve, comedian Reese Waters and social media correspondent Sarina Morales are joining the network’s team in Bristol, Connecticut, and intend to tap into the digital landscape to reach the millennial generation.

The trio will be doing special reports for the franchise show — such as going on the road with a college football team or reporting from the 16th hole at this weekend’s Phoenix Open — and it will be easy to spot their segments amid the sea of veteran talent.

“I’ll be different from a traditional ‘SportsCenter’ reporter because I won’t be behind a desk in a suit,” Reeve, 22, who shares the square jaw and broad shoulders of his father, told TheWrap. “These stories are not going to appear on air and then fade off — they are going to get an extended life digitally and on social media.”

“We are looking for new voices who can tell stories through their eyes and not in the ways we typically do,” said Glenn Jacobs, Senior Coordinating Producer for SportsCenter Digital, Now and Next-Generation Content. “It is really about making ‘SportsCenter’ an active part of sports fans’ lives, not just a passive one.”

As for Reeve, “he is just impressive, the way he thinks about things and sees the world. He has a really good sense of the stories he wants to tell that both interest him and ‘SportsCenter’ fans,” said Jacobs.

His father Christopher Reeve, who died in 2004 after being paralyzed from a riding accident nine years earlier when Will was just 11 years old, and mother Dana, who died from lung cancer in 2006, would have been equally impressed.

“Hopefully they would get a kick out it,” said Will. “The things I am interested in and passionate about are similar to what they were. My parents definitely define who I am.

“My dad and I had a huge bond and shared a love of sports. I hope they would be proud and say, ‘Great job,’ no matter what. Then my dad would probably tell me to straighten my tie!” he laughed.