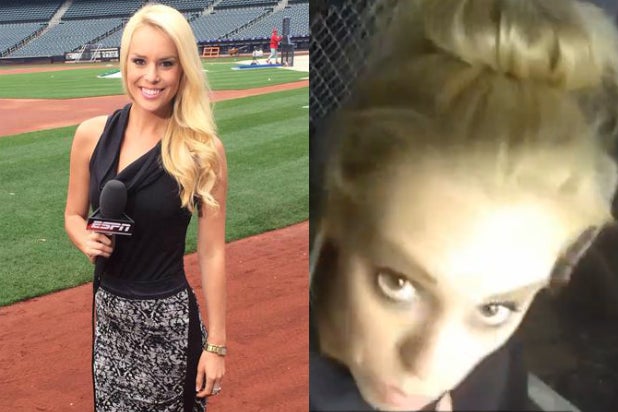 ESPN has suspended Britt McHenry just hours after a video surfaced of the reporter swearing at and insulting a tow lot employee.

“I’m in the news, sweetheart, I will fucking sue this place,” McHenry said on the video released by LiveLeak.

McHenry went on to make fun of the attendant’s appearance and education.

“Lose some weight baby girl,” she told the clerk, who can be heard threatening to make the recording public if McHenry continued to be rude.

The confrontation apparently happened after McHenry’s car was towed by Advanced Towing in Arlington, Virginia, on Apr. 6.

“In an intense and stressful moment, I allowed my emotions to get the best of me and said some insulting and regrettable things,” she wrote. “As frustrated as I was, I should always choose to be respectful and take the high road. I am so sorry for my actions and will learn from this mistake.”

The one-week suspension goes into effect immediately, a spokesman from ESPN said.

In an intense and stressful moment, I allowed my emotions to get the best of me and said some insulting and (cont) http://t.co/Wx37XF2QtM