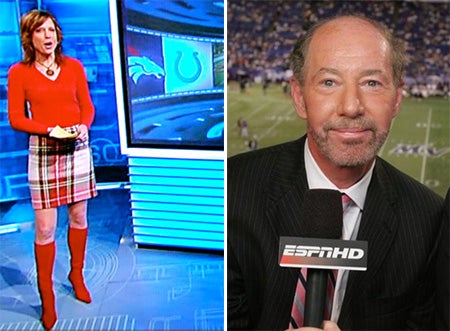 In the latest sex-related scandal to rock Bristol, ESPN suspended “PTI” host Tony Kornheiser for two weeks on Tuesday after comments the host made last week about “Sportscenter” anchor Hannah Storm on his radio show.

Tony Kornheiser’s comments about Hannah Storm were entirely inappropriate. Hurtful and personal comments such as these are not acceptable and have significant consequences. Tony has been suspended from PTI for two weeks. Hannah is a respected colleague who has been an integral part of the success of our morning SportsCenter.

Here are the comments Kornheiser made on February 16: “I know she’s very good, and I’m not supposed to be critical of ESPN people, so I won’t. But Hannah Storm, come on now! Stop! What are you doing? … She’s got on red go-go boots and a Catholic-school plaid skirt. Way too short for somebody in her 40s — or maybe early 50s by now. She’s got on her typically very, very tight shirt. She looks like she has sausage casing wrapping around her upper body.”

On Friday, Kornheiser told his radio show listeners that he apologized to Storm, and she accepted. "I’m a troll; look at me," he said. "I have no right to insult what anyone else looks like, what anyone else wears."

But that apology apparently wasn’t enough for ESPN’s brass. (Although there is some speculation the suspension is more about another comment Kornheiser made on the show about longtime network personality Chris Berman’s weight than those directed at Storm.)

Nonetheless, it’s just another example of the frat-like atmosphere that envelops ESPN. Last year, baseball analyst Steve Phillips was suspended and ultimately fired following he admitted to an affair with 22-year-old production assistant, who allegedly threatened his family after the relationship ended.

The Phillips saga followed in the wake of Harold Reynolds, another former baseball analyst for ESPN, who was axed by the network over alleged sexual harassment allegations. Reynolds sued, and eventually settled out of court.

In 2006, Sean Salisbury, a football analyst, was suspended after he took cellphone photos of his penis and showed them to a female employee.

"I was ashamed, and I didn’t want to say anything," Salisbury, who had long denied the incident ever happened, told the USA Today last month. "I thought it would go away and let my ego get in the way. Since then, I’ve beat myself up about it more than 10 baseball bats could. A stupid mistake can cost you, and this has really cost me. I should have been having this conversation a long time ago.”

Will ESPN Become the Worldwide Leader in Lawsuits?