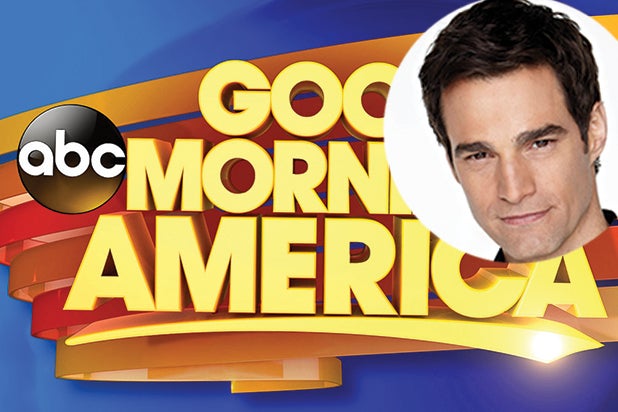 He will serve as senior meteorologist for “Weekend Good Morning America” and as part of ABC News’ extreme weather team headed up by Ginger Zee. As part of the team, Marciano will appear across other ABC News properties.

Zee previously served as the weather anchor of “Weekend GMA.” She was promoted in December to take over Sam Champion’s duties at “GMA” when he left for The Weather Channel.

Marciano’s exact start date hasn’t yet been determined, but it will be sometime in the fall.

TheWrap first reported Wednesday that Marciano is leaving “ET.” Individuals with knowledge of the situation said that Marciano wanted to return to his meteorology and weather reporting roots.

Also read: ‘The Talk’ Beats ‘The View’ in Key Demos for First Time Ever

The search has been underway for a couple months for his “ET” replacement.

Marciano, 46, currently co-hosts the entertainment news program with Nancy O’Dell. He was hired at “ET” in January 2013 to replace Mark Steines.

Before joining “ET,” Marciano worked as a meteorologist and weather reporter at CNN for 10 years. His reports on the cable network about Hurricane Katrina and the BP oil spill in the Gulf of Mexico earned him a Peabody Award.

Prior to CNN, he served as chief meteorologist for KATU-TV in Portland, Ore. and also worked as a weather reporter at KPLC-TV in Lake Charles, La., and WVIT Connecticut News 30 in West Hartford, Conn.

A veteran weather anchor and an award-winning journalist, Rob will join GMA Weekend and report on the latest weather headlines throughout the week as well as partner with our talented Chief Meteorologist Ginger Zee and the Extreme Weather Team for weather coverage across all ABC News broadcasts and platforms.

Rob is a versatile storyteller with the ability to effortlessly engage with viewers.  He joins us from Entertainment Tonight where he has been co-anchor since January 2013.

Prior to his role on ET, Rob spent nearly a decade working at CNN as a news and weather anchor. From tornadoes and blizzards to avalanches and mudslides, Rob has covered some of the biggest weather events and natural disasters in recent memory. His riveting reports from the field during Hurricane Katrina and the BP oil spill were recognized with the prestigious Peabody award.

A graduate of Cornell University with a bachelor’s degree in meteorology, Rob holds the American Meteorological Society Seal of Approval and is a Certified Broadcast Meteorologist (CBM). He began his career in journalism as a weather anchor at WVIT in Connecticut and later went on to work as a meteorologist for KPLC-TV in Lake Charles, Louisiana. Rob was chief meteorologist for KATU-TV and 750 KXL News Radio in Portland, Oregon before joining CNN in 2003.

An avid outdoorsman and major sports fan, Rob is thrilled to return to his roots in the Northeast with his wife Eryn and daughter Madelynn.

The Extreme Team has deftly covered every major breaking weather event and their impact on Americans including the crippling Polar Vortex, the flooding in Colorado, the wildfires in California, and the start of hurricane season.  Their dedication, focus and willingness to go to whatever corner of the country severe weather is happening has made our team the best in the business.

Rob is a superb reporter with wide-ranging experience and true passion for weather and I look forward to watching him work alongside Ginger and the GMA team.

Please join me in welcoming him to ABC News.