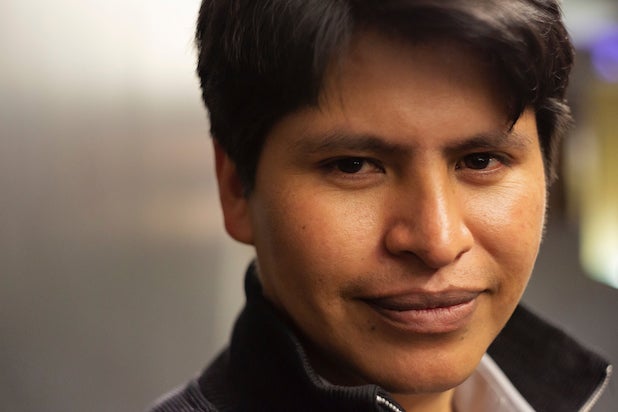 "Eternity" screening and Q&A with director Oscar Catacora. Hosted by The Wrap and held at the Landmark Theatre in West Los Angeles.

“Eternity,” Peru’s entry in this year’s Best Foreign Language Oscar category, has a language has never been heard in world cinema before: the language of the Aymara.

As part of TheWrap’s screening series, director Oscar Catacora discussed bringing the indigenous people of the Andes and their culture and struggles to the world through his camera.

“This story is much like the ones of my grandparents,” said Catacora, who himself is Aymara. “This was a very important subject to me, not just because of my upbringing, but because of the issue facing Aymara communities.”

Also Read: Making a Terrorist: 'The Journey' Director Explains How He Created Evil on Screen

Titled ‘Wiñaypacha’ in Aymara, the film follows Willka and Phaxsi, an elderly indigenous couple who have been abandoned by their children and society as a whole. Despite this, the couple waits and hopes for their son’s return, quietly honoring the Aymara tradition of respecting nature even as the harsh terrain of the Andes grinds them down.

Through long, static takes, Catacora shows the quiet and melancholy life this couple leads, preserving a way of life that feels as if it will die soon after they do. While younger generations of Aymara have assimilated into modern society, their elders are often left behind to fend for themselves. Catacora, who was raised in the Andes by his family, was one of the few who came back after earning his communications degree.

“I’m drawn to the idea of the separation of families worldwide and what happens when the older generations get abandoned by their children and their communities. It’s a universal problem,” he said.

The stationary cinematography was done both for practical and artistic reasons, as it made it easier to shoot the film in the cold, windy, thin air of the high Andes. And Catacora and his team needed all the help they could get.

“Several members of the crew got the flu while we were filming. Others were throwing up because of the high altitude,” he said. “We found an abandoned settlement that we rebuilt.”

But the biggest challenge was working with two actors who not only have never been on camera before but live in isolated communities that don’t even understand the concept of cinema or acting. Willka was played by Catacora’s grandfather, Vicente, and Phaxsi was played by another Aymara named Rosa Nina. Both of them immediately agreed to star in the film, even if they didn’t exactly know what it was they were agreeing to take part in.

“It was quite a feat to get those two to act because they live in areas where access to TV or electronics is very limited,” he said. “They only speak Aymara and we have to find a way to make them act. The closest thing in Aymara language or culture is ‘to lie,’ and obviously, they think that’s bad. It took several long talks for them to understand the story we wanted to tell.”

While Vicente Catacora hasn’t seen the film due to his failing eyesight, Nina did see the film before it won several honors at this year’s Guadalajara International Film Festival. It was the first time she had ever been in a movie theater before.

“She had this amazing experience watching a movie for the first time and seeing herself in the movie,” Catacora recalled. “When it ended, she told me, ‘Hey, that thing you did? I’m a part of that!'”