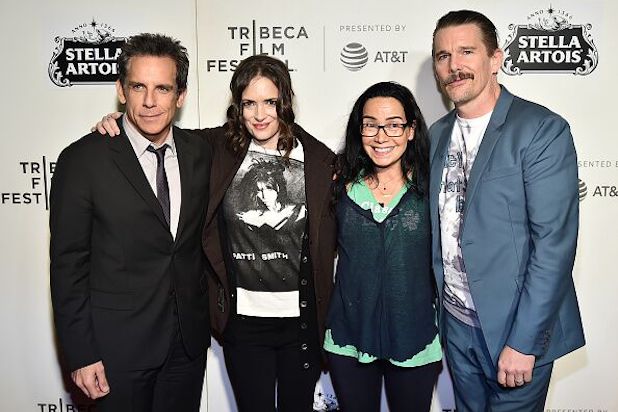 Ethan Hawke took a trip down Memory Lane this weekend at the Tribeca Film Festival to celebrate the 25th anniversary of “Reality Bites,” the film that gave him his big start… and, he says, that he almost turned down.

Hawke attended a special 25th anniversary screening of the 1994 cult film, along with Winona Ryder, Janeane Garofalo, Ben Stiller, writer Helen Childress, producer Michael Shamberg, and executive producer Stacey Sher. He even came dressed for the occasion, wearing a “Hey, That’s My Bike” shirt in homage to the fictional band in the film.

While Hawke had previously appeared in “Explorers” and “Dead Poets Society,” “Reality Bites” was his first shot at a leading role. Stiller, meanwhile, made his directorial debut with the film. But neither would have found that opportunity if it wasn’t for Winona Ryder, who introduced the actors to each other.

“I remember you called me, you said I should talk to Ethan,” Stiller recalled to Ryder during a Q&A panel. His response was, “Who is this Ethan Hawke guy?  What, is he like in ‘Explorers’? I mean, come on.”

Hawke, for his part, said that Ryder made her pitch to him to be in “Reality Bites” by having him watch “The Ben Stiller Show.”

“I was like ‘Who is Ben Stiller?’ You just worked with Scorsese and you are going to work with this clown?” Hawke joked.

But Hawke’s ultimate decision changed his career, setting him up for a future in film that included four Oscar nominations, for which he says he’s forever “indebted” to Ryder.

“Winona believed in me,” he said. “Winona got me this job. This job changed the trajectory of my career entirely … I’m just so grateful to you, Winona.”