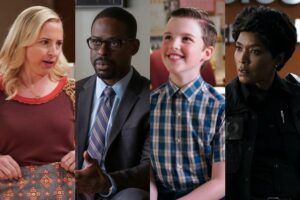 BRUSSELS, BELGIUM - MARCH 22: The European Union flag flies at half mast outside EU Commission Headquarters following todays attack on March 22, 2016 in Brussels, Belgium. At least 30 people are thought to have been killed after Brussels airport and a Metro station were targeted by explosions. The attacks come just days after a key suspect in the Paris attacks, Salah Abdeslam, was captured in Brussels. (Photo by Carl Court/Getty Images)

Though the U.S. box office for Christopher Nolan’s “Tenet” has caused alarm about the state of American theaters six months into the pandemic, the Warner Bros. film has earned solid numbers overseas thanks in part to European theaters. But with COVID-19 infection rates rising again throughout Europe (and many parts of the U.S.), there’s no guarantee that those countries will still be open for any big Hollywood films to be released this fall.

In the U.K., daily new cases of the virus have risen from around 1,300 at the start of September to over 5,000 on Wednesday, edging closer to the peak of 6,000 daily new cases from back in early May. Across the continent, new cases reached a record high of 52,418 over a rolling seven-day average on Tuesday, according to Johns Hopkins University.

While the death rate average remains well below 1,000, thanks to a mix of infections being primarily among younger individuals and improved knowledge on how to treat the virus, there is still concern that the arrival of flu season could change that. If deaths do rise, governments will have to make some difficult decisions about whether to close businesses again, risking a double-dip recession.

For now, the majority of the European exhibition market has rebounded better than its American counterparts. According to reports from the International Union of Cinemas in Brussels (UNIC), most of the continent’s theaters were reopened by July, with capacity limits ranging from 20-50% being implemented and the same safety regulations seen in American cinemas being enforced.

But while countries around the world have seen significant drops in overall weekend box office numbers compared to September 2019, the drop is far less drastic in some major European countries than in the U.S. Data from Comscore and UNIC shows that gross drops for the first weekend of September ranged between 58% in Spain year-over-year to as low as 23% in Germany. By comparison, U.S. numbers for that weekend were down 78%.

“Between the infection rates and just the overall response from governments to the pandemic and reopening, the U.S. has fallen behind in customer perception,” Boxoffice editor Daniel Loria told TheWrap. “Ultimately, it’s the same safety protocols being implemented in theaters around the world. It’s just that Europe handled reopening and containment better than the U.S., so there’s more people coming back to theaters.”

For all the talk of Warner Bros. releasing “Tenet” before American audiences were ready to go back to theaters, the studio may have caught the best window to release the $200 million-budgeted film internationally. Many major box office markets in Europe and Asia have contained the virus in the third quarter, giving “Tenet” the best opportunity to reach as wide an audience as possible in a pandemic-affected environment. So far, the film has grossed $217 million overseas, which Warner Bros. International Distribution Chief Andrew Cripps said equates to an estimated 30 million tickets sold despite the wildly uneven environments that “Tenet” has opened into around the world.

“We’ve released ‘Tenet’ in 54 countries, and each market is in a different timeline in terms of how they are handling this virus,” Cripps said at TheWrap’s annual TheGrill conference on Tuesday. “While the U.K. is now facing a second wave, much of the European market has rebounded a lot faster than the U.S. and we’re especially seeing stronger numbers in France, Germany and Russia.”

“In Asia, we see countries like China and Korea rebounding, and even Taiwan has done so well handling the virus that theaters there didn’t even close to begin with,” he said. But at the same time, there are other countries like India and the Philippines that are still closed, so every country is a unique story.”

This week, Disney decided to push back the release of “Black Widow” from November 6 to summer 2021, with roughly a dozen other films from the studio also getting delayed. Studio insiders have told TheWrap that warnings of a second wave in Europe were a factor in the move, and while Asian markets have taken larger shares of overseas grosses for Marvel films in recent years, Europe still contributed nearly 25% of the record $1.93 billion overseas total for “Avengers: Endgame” last year.

Theater owners are waiting to see what MGM and Universal will do with the James Bond film “No Time to Die,” which is still slated for release in November. For Europe, this is especially critical since Bond films have historically brought a strong turnout. In 2015, more than half of the $680 million overseas gross for “Spectre” came from European markets, as was the case for “Skyfall” with its $804 million overseas gross.

But whether or not “No Time to Die” moves could largely hinge on Bond’s homeland, the U.K.. Reluctant to close businesses again, Prime Minister Boris Johnson has announced a 10 p.m. curfew for business and other measures in an effort to drop infection rates as the country faces a second wave. While this will mean that British theaters will lose late-night screenings, it’s not yet a critical blow.

What would be is a drop in moviegoer turnout over the coming months or, if hospitalizations and deaths in the country escalate, a more widespread shutdown like the one that occurred at the onset of the pandemic. Either situation could force “No Time to Die” to move, as Britain has been a critical box office market for Bond with more than $100 million grossed for both “Skyfall” and “Spectre.” For now, a spokesperson for MGM said it is committed to a fall opening, with a U.K. release coming via Universal on November 12 and other countries getting release later that month.

Without “No Time to Die,” any theaters open in Europe this fall would have to rely more on local titles, which can be hit and miss in terms of ticket sales. On one hand, Spain has seen strong numbers over the past two months for the sequel to “Padre No Hay Mas Que Uno,” a comedy that has grossed just over $14 million despite some theater closures in Catalonia and capacity limits nationwide. By comparison, the first “Padre” made $16.3 million last year.

On the other hand, France saw poor performances from its local films when theaters reopened in July, forcing many theaters, including Paris’ famous Le Grand Rex, to close on weekdays until the release of “Tenet” to lower operating costs. Loria said that while local hits help push overseas markets to record business, it’s Hollywood that provides stability.

“Those four-quadrant titles like ‘No Time to Die’ and ‘Black Widow’ provide the base for the rest of the market,” he said. “Whether they stay is going to depend on how well a lot of these reopened markets handle the next few weeks when it comes to containing this virus.”