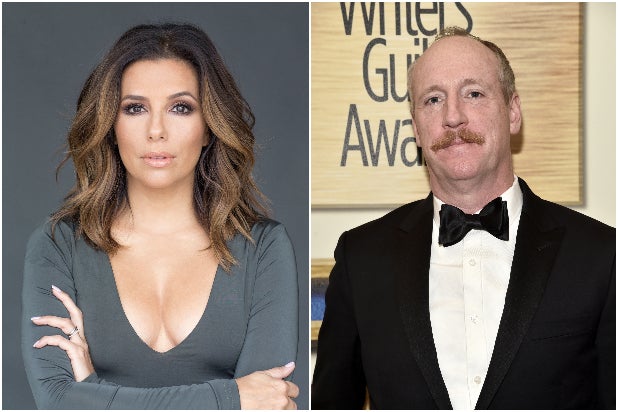 Eva Longoria is joining “Veep” actor Matt Walsh in a comedy Walsh co-wrote called “Unplugging,” in which the two will play husband and wife. Longoria is replacing Isla Fisher in the role.

“Unplugging” is currently in production in Oklahoma, and Lea Thompson, Keith David, Nicole Byer and Al Madrigal have all joined the cast.

“Unplugging” is the story of a man who, after the death of a friend, is inspired to whisk his wife (Longoria) away to a remote town for a “digital detox.” Their romantic weekend quickly turns disastrous with unearthly encounters, strong edibles and bizarre locals. With no cell and internet service, they’re lost but end up reconnecting with each other along the way home.

Film editor Debra Neil-Fisher (“Ted,” “The Hangover”) is making her directorial debut on “Unplugging,” and Walsh wrote the script with Brad Morris.

Also Read: Eva Longoria to Direct and Star in 'Spa Day' at Sony

The film will be produced by Debbie Liebling, Kevin Matusow and Carissa Buffel for The Traveling Picture Show Company. Morris and Walsh are also producing.

Longoria will next be seen in Amazon’s “Sylvie’s Love” opposite Tessa Thompson, and she’ll make her feature directorial debut on the biopic “Flamin’ Hot” for Searchlight in 2021. She’ll also direct and star in “Spa Day” at Sony and recently joined the voice cast of “The Boss Baby” sequel.

Walsh starred as Mike McLintock on HBO’s “Veep” and is a founding member of the improv-sketch comedy troupe Upright Citizens Brigade, and in film Walsh was last seen in the rom-com “Under the Eiffel Tower” in 2019.