“Tutta la pasta fatta in casa” is Italian for “All pasta is made in house,” and unless you have an Italian grandmother, rolling and crafting your own pasta in your home is a dying art.

But acclaimed Los Angeles chef Evan Funke walked away from his hit restaurant Bucato three years ago and traveled to Bologna, Italy, to learn how to make handmade pasta straight from the masters.

In an exclusive clip from the new documentary “Funke,” which makes its world premiere at the L.A. Film Festival on Sept. 26, the master talks pasta as part of the journey he had to opening his blockbuster Venice, Calif., restaurant Felix in 2017. 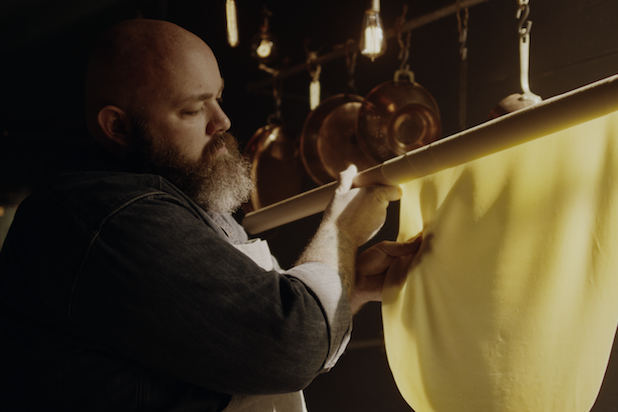 “I’ve been waiting years to make these pastas in a true authentic matter,” Funke says in the clip. “I spent a little over three weeks eating just this. I ate it 32 times in order to completely saturate myself with this simple dish.”

Funke got his start working under Wolfgang Puck at Beverly Hills’ iconic Spago, and then started his restaurant Bucato before abruptly resigning in 2015. That’s when he traveled to Bologna and brought back what he learned. The clip from “Funke” shows him explaining his recipe for pappardelle.

“It’s over 200 years old. This is like a star. People are going to be ordering pappardelle through the roof here,” Funke said. “And any ragu Bolognese that you’ve had that is red, it is not ragu Bolognese, it is ‘meat sauce.'”

“Funke” is directed by Gabriel Taraboulsy. The film is produced by Taraboulsy, Alexander Emanuele, Jay Holzer, and Cecile Murias, and is executively produced by Larry Fitzgibbon, Oren Katzeff, Steven Kydd, and Joe Perez.

Watch the exclusive clip above.

"Low plastic stool, cheap but delicious noodles, cold Hanoi beer." Bourdain famously tweeted this line along with a photo of himself and President Obama hunching over a small table in Vietnam as he demonstrated the best way to slurp noodles. It's an incredible sight to see both Obama and Bourdain so at home with their worldly curiosity and feels like an image of Americans at their best.
View In Gallery
x
Looks like you're enjoying reading