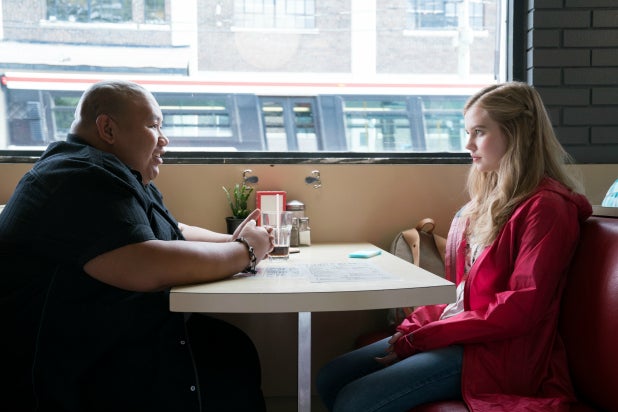 “Would you love me if I looked like somebody else?” is the sort of hypothetical question that lovers have been answering, as honestly as possible (I hope), for centuries. But the odds of having to put your money where your mouth was has always been relatively small. Usually your boyfriend/girlfriend/whatever doesn’t end up possessing someone else’s body the next day, and then the day after that, and then the day after that.

“Every Day” takes the teen supernatural romance genre and bends it into lofty knots, with a premise that sounds nifty but raises difficult, nerdy questions. Angourie Rice (“The Beguiled”) stars as Rhiannon, a teenager who falls in love with “A,” a disembodied consciousness who wakes up every single morning in someone else’s body.

“A” always leaps into the body of someone their own age, in the same general geographic area, but never the same person twice. So Rhiannon never knows who she’ll be dating tomorrow, and her concepts of gender, monogamy, and even physical attraction become increasingly fluid.

It’s a concept that addresses deep philosophical ideas about the nature of identity, sexual and otherwise, as well as the fundamental limitations of an individual human experience. But it’s also a notion that’s so bizarre (and comes burdened with just enough rules) that you can’t help but wonder about all the weird minutiae. How did this happen to “A” in the first place? How does a childhood without social constants uniquely affect one’s psyche? What happens if “A” drives to an extremely isolated location where they’re the only person their own age? If “A” falls in a forest, does “A” make a sound?

Director Michael Sucsy (“The Vow”) and screenwriter Jesse Andrews (“Me and Earl and the Dying Girl”), working from the novel by David Levithan, give Rhiannon plenty of time to ask most of these questions. It’s not a film that gets bogged down by external forces, so at no point does “A” have to hide themself from a secret government organization or run afoul of a clandestine body-swapper cabal.

It’s a strange story about an unusual person who falls in love with a decidedly ordinary individual, at a time in their lives when questioning your sexual identity is perfectly natural. Taking the premise of “Every Day” to its logical conclusions, as it turns out, is perfectly interesting enough to carry a whole film.

The story begins with “A” waking up in the body of Justin (Justice Smith, “The Get Down”), an unremarkable and selfish teenager who happens to be Rhiannon’s boyfriend. Rhiannon and “Justin” have a powerfully romantic day together, only for the real Justin to return the next morning, unaware that he was ever an attentive lover who cared more about Rhiannon than he did about sports. Several days of missed connections later, “A” explains that several people in Rhiannon’s life lately have been exactly the same person, and to her credit, Rhiannon immediately picks up on just how creepy that is.

Setting aside the tough sell that a disembodied soul possessing random strangers every day is is a thing now, Rhiannon has the good sense to point out — once she buys into the gimmick — that she thought she was having a romantic day with her boyfriend, and that “A” kissed her under false, unsettling pretenses. The best defense “A” has boils down to the fact that “A” has no control over their situation and is doing the best they can under the circumstances. At least the elephant in the room is addressed, but maybe the elephant deserved a sterner lecture about agency.

It’s nothing short of a miracle that “Every Day” doesn’t collapse into the junk pile of its own refrigerator logic. Sucsy keeps the movie balanced nimbly between complex questions and earnest sentiment, and the need to constantly introduce new characters and circumstances keeps “Every Day” brisk and engaging.

Sometimes “A” wakes up in wacky situations — like in a family that’s flying to Hawaii, which would potentially take him away from Rhiannon forever — or in darker scenarios, like the body of a person planning serious self-harm. “A” never knows what will happen to them next, and the possibilities are reasonably well explored.

But the best and most impressive aspect of “Every Day” is that a dozen or more actors are playing the exact same character, and you never question it once. A whole lot of performers are asked to do a whole lot with, for the most part, very little screen time, and it’s a testament to the actors, the director, the screenwriter and most certainly casting director Rori Bergman (“The Americans”) that this works at all, let alone like gangbusters.

“Every Day” is a fascinating little movie with flaws inherent to its concept, and it’s easy to forgive it for that. The story probably can’t help posing more questions than it could ever reasonably answer, and the great cast goes a long way toward smoothing out the creases.

But much of that good will is at least partially undone by the ending, which feels like a bit of a cop-out after a story about opening your heart to many different genders, body types, and even polyamory. It makes you wonder if maybe the movie missed its own point. Or worse, that it thinks Rhiannon’s journey was all some sort of “phase.”