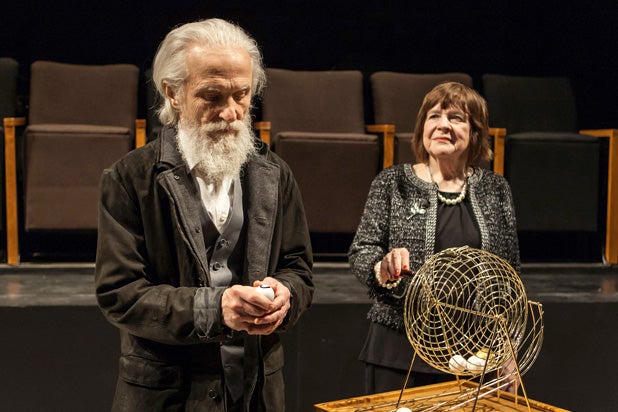 Jaded theatergoers in the mood for something completely different should check out Branden Jacobs-Jenkins’s new play, “Everybody,” which opened Tuesday at the Pershing Square Signature Center.

It’s loosely based on the 15th-century play “Everyman,” which tells the story of a man who, in his confrontations with God and Death, can’t find anyone, except for Good Deeds, to accompany him on his journey to the afterlife. That’s also pretty much the story Jacobs-Jenkins tells in “Everybody,” and if you’re still intrigued, you should stop reading this review and buy tickets to the Signature Theatre production. Everybody else may continuing reading.

“Everybody” is 90 minutes of theatrical whimsy, and it’s remarkable that Jacobs-Jenkins’s wit and invention flag only at the very end, which is when director Lila Neugebauer and set designer Laura Jellinek pull out all the stops, giving us a dance of giant skeletons and a bare-bones stage that miraculously opens up to reveal a lonely hell-hole landscape.

Whether it’s supposed to represent the entry to hell is debatable, but since Everybody (David Patrick Kelly) jumps into a hole at the end and an entity named All the Sh–ty Evil Things (Chris Perfetti) jumps in after him, let’s go with hell. Anonymous, who wrote “Everyman,” had Good Deeds follow his hero. Since we live in a more cynical age, Jacobs-Jenkins substitutes with Sh–ty Evil Things.

“Everybody” creeps up on you, and you will be charmed — or simply annoyed. The play begins with an usher (Jocelyn Bioh) giving us the usual cellphone and unwrapped-candy speech, which goes on a lot longer than usual; and with the house lights still up she slowly but miraculously morphs into God from one of the more bombastic, threatening, and nastier pages of the Old Testament.

Death, in comparison, serves as comic relief, and it helps that she’s played by the perpetually pixelated Marylouise Burke. The only disturbing thing about her is that Death begins asking questions of the audience. Ouch.

It’s a relief of another kind when it’s clear that Jacobs-Jenkins has planted actors in the theater, and they, not us, will put on the play titled “Everybody.” God tells us that each of these actors has memorized the entire text and will be assigned his or her role by lottery on the spot. God also tells us that we can choose to believe it’s a real lottery or not.

I chose not to believe since the actors at the critics preview I attended looked and played their respective roles to perfection, especially the aged but very energetic David Patrick Kelly as Everybody and the subtly beguiling Louis Cancelmi as Stuff. The Playbill, handed out after the performance, as well a billboard in the lobby post-performance, only reinforce the ruse.

During most of the performance, the house lights remain up and none of the actors actually take the stage, which has been reduced to a narrow row of theater seats, identical to the ones we’re sitting in. Even before Stuff shows up in all his materialistic glory and rides off on a motorbike down the aisle, it’s obvious that Friendship (Lakisha Michelle May) and Kinship (Michael Braun) are not going to join Everybody on his final journey.

Jacobs-Jenkins may not have a lot to say that’s new about Life and Death and Everybody in between, but one thing is for sure. He knows how to create whimsy.