A version of this story about “Everything Everywhere All at Once” costume designer Shirley Kurata first appeared in the Below-the-Line issue of the TheWrap’s awards magazine.

Despite the extravagant costuming in “Everything Everywhere All at Once,” costume designer Shirley Kurata had to work economically to accommodate the indie film’s limited resources. Working with directors Daniel Kwan and Daniel Scheinert, who originally came from the music-video world and understood the film’s budgetary constraints, Kurata saved money on certain looks to splurge on others, even if that meant deviating from costumes indicated in the script.

As Evelyn (Michelle Yeoh), Waymond (Ke Huy Quan), Deirdre (Jamie Lee Curtis) and Joy (Stephanie Hsu) transport from the film’s main universe to different parts of the multiverse, Kurata adjusted their costuming to fit each version of the character. While Kurata drew from quotidian looks she observed in Chinatown for Evelyn and Waymond’s costuming in what she calls “the tax universe,” she was influenced by Yeoh’s roles in “Crouching Tiger, Hidden Dragon,” “In the Mood for Love” and other Asian films for Evelyn’s movie-star version.

The film’s larger-than-life villain, Jobu Tupaki, on the other hand, is what Kurata calls a “free-for-all,” with inspiration coming from genres across Japanese fashion, K-pop and science-fiction films. Jobu is a version of Joy who has been overloaded by Evelyn’s demanding nature, and her origin story involves experiencing everything, everywhere, all at once. Kurata wove in simpler, classic looks to offset the experimental pieces and reflect Jobu’s constantly shifting reality. “I didn’t want it all to be over-the-top, crazy pieces because she was able to switch so easily,” Kurata said.

Kurata also built upon the film’s mother-daughter conflict by referencing Asian tropes that play into their fractured relationship. When Evelyn first meets this version of her daughter, Jobu appears in a preppy golf look — a costume Kurata says exemplifies the perfect Asian daughter who excels at sports and everything else in her life. Moments later, however, Jobu suddenly appears in an Elvis costume with pink hair and a cigarette, a transformation Kurata points to as a way to “antagonize her mother.” As the film also hinges on Evelyn’s willingness to fully accept her daughter’s sexuality, Jobu’s costuming experiments with elements of femininity and masculinity. 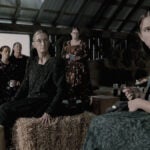 Also Read:
How ‘Women Talking’ Turned a Hayloft Into a ‘Sacred Space’

By the end of the film, Jobu falls down the stairs in a look Kurata calls “jumbled Jobu.” To match both the emotional turmoil and chaos as Jobu and Evelyn jump between different universes, Kurata constructed the outfit by draping pieces from previous costumes on a mannequin to achieve an avant-garde free-handed drape. “She’s just trying to take everything in and it’s all a jumbled mess of an outfit,” Kurata said.