A version of this story about “Everything Everywhere All at Once” star Stephanie Hsu first appeared in the Awards Preview issue of TheWrap’s awards magazine.

Stephanie Hsu remembers the moment almost three years ago in the pre-pandemic days of early 2020. She was on the set of “Everything Everywhere All at Once” and told director Daniel Kwan, “This movie is gonna bring people back to the movie theaters.” At the time, she was talking about the struggle to get people off their couches in the age of streaming, as yet unaware of the pandemic that would threaten to destroy cinema-going altogether.

“Truly having no concept of Hollywood or box offices — I didn’t know what any of that meant,” Hsu told TheWrap. “[But] I could tell that this film had the scale and the depth to pull people to see it in a theater with their friends and strangers. I could tell that it was really special. But I certainly had no idea that it would do what it’s doing currently, nine months later.” 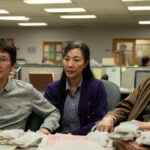 And by that she means: Riding the wild wave of record-breaking success and Oscar buzz that has been propelling “Everything Everywhere All at Once” since its release last spring. Raking in $104 million worldwide, the mad, maximalist jaunt through multiverses written and directed by Kwan and Daniel Scheinert (a.k.a.“The Daniels”) is the biggest indie hit of the post-pandemic era and the highest-grossing movie ever for art house distributor A24.

Hsu stars as Joy, the daughter of Chinese immigrants (played by Michelle Yeoh and Ke Huy Quan) who works out her conflicts with her mother in infinite parallel universes over which she reigns as an all-powerful, nihilistic villain called Jobu Tupaki. Her expansive performance — she is despondent, hoodie-wearing Joy one second and gleefully destructive Jobu in a shiny white Elvis suit the next — has landed her in the Oscar race for Best Supporting Actress.

Such a dizzying level of attention is a new experience for Hsu, a California native who began her career in experimental theater and has a recurring role on “The Marvelous Mrs. Maisel.”

“I don’t take any of it for granted because we recognize how big of a bite it is to chew and for people to really get behind,” she said. “Even though it’s gotten all flashy and buzzy, we still are very much underdogs, just in the spirit of how we made the film and who we are. So it just means so much when people get excited about it.” 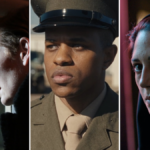 Also Read:
Hey, Oscar Voters: Here Are Some Dark Horses You Might Want to Consider

For Hsu, part of the thrill of making “Everything Everywhere” was working so closely with Yeoh, with whom she spars physically and psychologically. Their battle culminates in a moving scene that takes place in a parking lot and finds them finally coming to terms with the complexity — and deep, unconditional love — of their bond.

“Hearing people’s response to the parking lot scene is very healing for me because I didn’t know how many people had such specific mother-daughter relationships,” she said with a laugh. “I did not grow up talking about intergenerational trauma within the immigrant diaspora, but so many people who have similar upbringings are sharing their stories. The beautiful thing about art is that it makes you feel less alone.”

Hsu will next be seen in an untitled comedy directed by “Crazy Rich Asians” writer Adele Lim, Rian Johnson’s upcoming “Poker Face” series for Peacock, and the Disney+ fantasy-action series “American Born Chinese,” where she reunited with Yeoh and Quan. Looking further ahead, she is hopeful that the success of such a genre-defying mind-bender as “Everything Everywhere All at Once” will encourage Hollywood gatekeepers to take more chances on the stranger scripts that come their way.

“One of the things I’m most proud of,” she said, “is that it’s shaking up the movie industry.”