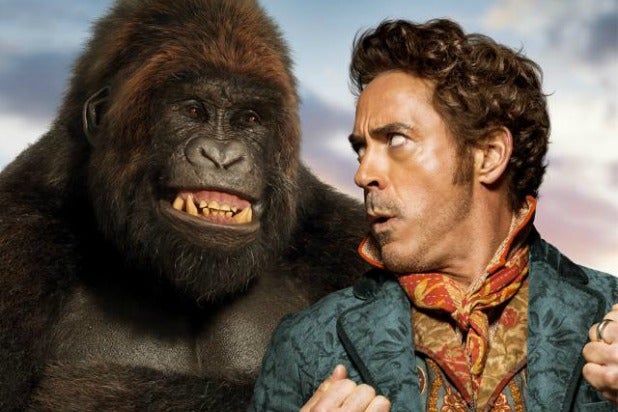 (Obviously, there are major spoilers ahead for “Dolittle,” since we’re going to discuss the end of the movie here)

“Dolittle” has been kind of a confounding film for a while now, for many reasons. Robert Downey Jr trying something completely different in his first movie since “Avengers: Endgame.” The movie landing in January despite its massive, blockbuster-level budget. The fact that it just looks strange. The marketing pushing the film as a “Hobbit”-esque whimsical fantasy adventure, which is not generally a type of movie that anybody is asking for.

The existence of this film becomes less puzzling when you realize that it’s basically just a live-action rendering of an animated film. But there’s no context that anyone could come up with that would make the ending of “Dolittle” feel like anything other than pure insanity. We’ve had a pretty good run of studio-produced madness the last couple months, with “Cats” and “Star Wars: The Rise of Skywalker” and “Last Christmas” still haunting our memories, so it’s impressive that “Dolittle” could manage to pull off some crazy nonsense that feels like something we haven’t seen before.

Also Read: Robert Downey Jr's 'Dolittle' Is a 'Calamity for the Ages' and a 'Haphazard Mess,' Critics Say

Okay, let’s get into it. I’m assuming that most of the people who will read this are here because they want to know about this scene without having to pay $15 or however much your local theater charges to sit through the whole thing. So I’m gonna set the stage for a moment so those folks can properly appreciate this big moment.

So the whole gist of the Dr. Dolittle character is that he likes animals more than he likes people — and, you know, he can talk to them. So he also is opposed to harming animals in any way. But the film’s story puts that ideology to the test.

The premise here is that the queen of England (Jessie Buckley) is dying, having been poisoned by a usurper (Jim Broadbent), and needs an antidote that can only be found from the fruit of this one magical tree (the Eden tree) on this one secret undiscovered island. So he sets out with a merry band of talking animals and one teenage boy who also loves animals (Harry Collett), with the bad guys (led by Michael Sheen) in close pursuit.

After a lot of shenanigans, the good guys and the bad guys all end up at their destination at just about the same time. And it turns out that there’s a dragon guarding the tree they’re looking for. So the bad guys attack the dragon and get pretty much wiped out, while the good guys just hide and watch. Once the battle ends, Dolittle starts chatting up the dragon, and they have a nice chat about their shared trauma (each have spouses who died) before Dolittle realizes that this dragon isn’t just sad — she’s also ill. And Dolittle thinks he knows why.

It turns out that the dragon has a bad case of intestinal blockage, and so the climax of this movie involves Dr. Dolittle reaching up the dragon’s anus to clear out the blockage. So we get an extended sequence of Robert Downey Jr pulling various things out of a CGI dragon’s butt, including human bones, Spanish Conquistador armor and bagpipes. And also the dragon lets out a big fart in his face.

Once he’s done, the dragon thanks Dolittle by allowing him to take a piece of the Eden tree fruit home with him.

So, yeah, that happened. In a movie for kids that cost upwards of $175 million to produce. What a time to be alive!