“Jax is a corporate faux-feminist ally who always manages to make it about her,” per her character description. “She is the boss at Parakeet Media which runs Phoebe’s podcast. She claims she has nothing but respect for Phoebe and Malika and the podcast they do but doesn’t follow up with giving them what they deserve. You need to watch your back with Jax … and your front, and probably your sides as well.”

Jax will be the latest hurdle for Phoebe as she works at adulting, a theme of the series. She’s already faced a host of problems in the show’s first few episodes, including overdue bills and sleeping with the campaign manager of the guy running in a Brooklyn election against her own brother (and talking about it to a video news crew). In fact, that hookup of hers — Hamilton — will be around for a while. 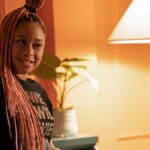 Also Read:
Phoebe Robinson on Exploring Adulting In ‘Everything’s Trash': ‘You’re Never Going to Have it Completely Figured Out’

“We have the great good fortune of working with a wonderful actor named Brandon J. McLaren, who’s playing Hamilton,” Groff told TheWrap. “And we wanted to keep that character around as an interesting obstacle/challenge for Phoebe both in her relationship with her brother, and in her own development. Like, what happens if I stay connected to this guy? So we’re going to explore a little bit more of that. I will tell you over the course of the season, we have not seen the last of him. She gives him a really hard shove at the end of Episode 3. That’s not the last we see of him. So that’s going to be really interesting.”

They were both interested in exploring adulting in the freshman show, which applies to all the characters and not just podcaster Phoebe. It’s a topic Groff, an executive producer and writer for the former ABC comedy “Happy Endings,” and previously, a consulting producer and writer on “How I Met Your Mother,” has had quite a bit of experience exploring on television.

“It’s a time of life that people like to write about because it is like that transition. All these shows are about adulting. ‘Scrubs,’ which I worked on, was kind of about turning these interns and residents into doctors and adults, and there’s always the work balance and the play balance. There’s the, ‘[I] don’t have as much money as some of my other friends do and how do I keep up?’ We explored that certainly on ‘Happy Endings.’ There’s love. There’s, ‘How do we as a married couple stay at the center of a friend group and not feel like we’re a drag on it?” Groff said. 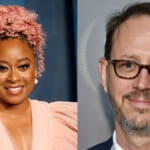 “In this show, we actually have a really funny daughter character, Aisha, played by this wonderful young actor Farah Felisbret. We’re having a really good time exploring that aspect of [Phoebe’s brother] Jaden and [his wife] Jessie being a little farther down the road in that regard,” Groff continued. “And then I think looking at Phoebe as … a little bit more unapologetically messy. Not necessarily looking for the one, you know? Different than Penny in ‘Happy Endings,’ who I think always was like, ‘I’m going to find that person. I’m going to find my ‘One Tree Hill,” to quote Elisha Cuthbert’s character. Phoebe is demonstrably and vocally less that way at the beginning. So it’s going to be interesting to watch her. Does she does she start to settle down? But also, maybe not.”