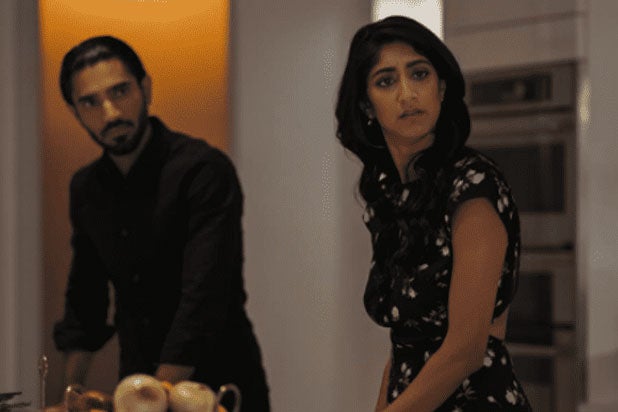 Blumhouse’s “Evil Eye” is a horror film that delves deeply into reincarnation and other Hindu philosophies, and star Sunita Mani saw similarities between the film and her personal life — one that was particularly “spooky.”

“My mom’s name is Usha, so when I read that in the script, I was like, spooky!” Mani told TheWrap, referencing Sarita Choudhury’s character, who plays Mani’s mother in the film. She explained that her connection to India became ingrained in her from a very early age, living in a south Indian household in Tennessee. She was made aware of the religion and customs through her parents and letters from her cousins who still lived in India.

“I definitely grew up with the concept of Evil Eye and reincarnation and the idea that family members or my mom would check charts and astrological signs, that’s huge in conversation and something that’s very embedded in the fabric of growing up,” she added. “I loved that it was embedded in the movie without explaining it … It’s kind of our firsthand experience growing up in American culture, but at the same time we have this real vulnerable exposure to another culture and it’s taken care of really well through the director and conversations with the cast. We were all bringing our specific experiences with that cross-cultural experience — everyone comes from a different Indian background, but we had a common language and understanding, and it was fun to say like my auntie did that and that but we were all getting at the same thing. We did all face that pressure from our parents in some form — marriage and success being one and the same and this idea is very planted in our culture.”

Also Read: Bleecker Street Acquires Worldwide Rights to 'Save Yourselves!'

“Evil Eye” follows a superstitious mother (Choudhury) who is convinced that her daughter’s new boyfriend is the reincarnation of a man who abused her, and almost killed her, 30 years ago. Elan and Rajeev Dassani direct based on a screenplay by Madhuri Shekar. Bernard White and Omar Maskati also star.

“It’s funny — I didn’t read it as a horror movie, to be honest,” Mani added. “I normally don’t go for roles that are so specific to my background. My reaction to this script was both terrifyingly close to home and exciting and compelled by that fact as well. I’ve never been presented with a script like this at all or this opportunity.”

The film, primarily set in the horror sphere, also tackles issues of domestic abuse, and Mani said it was at times “tricky” to get herself into such a dark mental space.

“We would go through spurts of shooting — I would have one week of intense scheduling and one day off and I got to relax to (be) the other human that I am,” she said. “Suritha’s character Usha is experiencing the horror of trauma and the story of abuse resurfacing, and that becomes the horror genre — she’s living one movie and I feel like I’m living in another movie.  My mentality most of the time was that I was living in this delusional fairytale — sometimes it was a romcom, sometimes it was a mysterious romance — but the trauma and the impact of the horror story didn’t really hit me until later … Most of the time, I wasn’t letting it go when we were off-camera. We were constantly thinking about these characters and the next scene, and what little nugget should we bring out to bring this part of this story home? It was a good kind of exhausted but it was staying in it because I wanted it to do it justice.”

Mani’s comedic background also helped her balance out the darker aspects of the film.

“I’m all about dimensionalizing an Indian-American experience on screen — this is just another aspect of representation for me,” she said. “Speaking to the horror aspect of it but also, you’re starting thinking of it as one movie and you kind of end up in this other movie that you weren’t expecting, and, we played the charming comedy aspect up top, so I was able to give Pallavi that dry sense of humor to balance out the intensity of what you would see later. It’s also part of my identity and I could bring it to Pallavi’s identity. It’s all part of a bigger picture.”