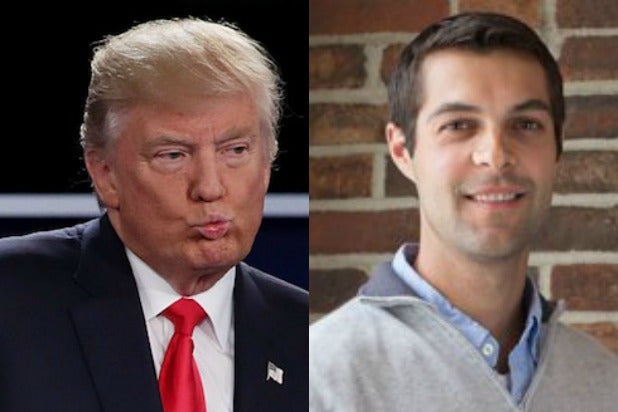 Aaron Holman wants America to hear more of the uncensored Donald Trump — and he’s raising money to make that happen.

Holman, a former Democratic Senate aide, has started a GoFundMe campaign to back the release of tapes from NBC’s “The Apprentice,” which vaulted Trump into major TV celebrity. According to a former “Apprentice” staffers, outtakes from the show contain Trump saying and doing even more outrageous things than the lewd sex talk the GOP nominee was heard using from a 2005 “Access Hollywood” tape. That material leaked late last week and has upended Trump’s White House campaign. But MGM, which owns the show, has not said it would release any material, and staffers say “Apprentice” producer Mark Burnett made them sign agreements that could mean a $5 million penalty for any leaks.

Holman says that’s a small price to pay to keep Trump away from the White House, so he’s trying to raise the $5 million through crowdfunding.

“I think he’s a dangerous man,” Holman told TheWrap, referring to Trump. “People in America don’t know who he really is.”

Holman, who worked in 2006 as a spokesman for Democratic Sen. Debbie Stabenow, wants former “Apprentice” workers who might have access to any incriminating Trump footage to know “someone’s watching out for you,” he added. “You have a duty to report this.”

But the Trump Sunlight Campaign, as Holman calls it, still has a very long way to go. As of midday Monday, the campaign had raised only $13,204 of its $5.1 million goal.

Holman says every little bit helps. He and his friends had been discussing for months how best to work against the Trump campaign. He was inspired to start the Gofundme bid after a former “Apprentice” producer tweeted over the weekend that much worse Trump material existed.

Trump Sunlight, he said, could serve as a legal defense fund even if it doesn’t meet the entire goal.

“We’re hoping the news and buzz will be helpful in raising more money,” he said.