Lindsay Lohan’s travels across India last year involved meeting with several victims of child labor and sex trafficking for a BBC documentary, which concludes that the demand for domestic help and consumer goods by India’s wealthy may be contributing to the horrors, TheWrap has learned. 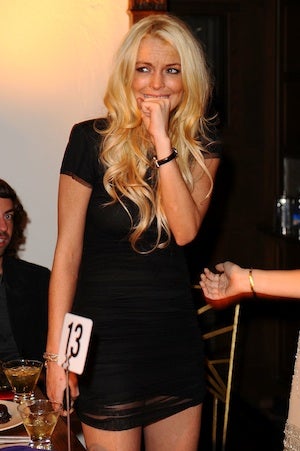 According to a person in the United Kingdom familiar with the project, the public broadcaster will announce  in a season launch press conference in London on Thursday that the actress got away from her "frantic Hollywood life” to travel “across India to meet the people involved in child trafficking.”
While some details of the trip have previously emerged — including Twitter postings from Lohan herself and a visit to Calcutta’s Sanlaap Women’s and Children’s shelter — material obtained by TheWrap lays out a much fuller sense of Lohan’s activities in India and the BBC documentary itself.
According to release materials from the BBC:
As Delhi proudly prepares to host the 2010 Commonwealth Games, Lindsay meets young boys who have normalised working 16-hour days under the constant threat of beatings, for a fraction of an adult wage.
To find out why a parent would send their young child away to work, Lindsay travels to rural West Bengal, where the picturesque Sundarbans belie the abject poverty made worse by annual floods.
Lindsay meets a reformed trafficker who would make a quick buck luring young girls away from naïve parents with offers of gainful employment.
In Kolkata, Lindsay visits a shelter where young girls promised domestic work for India’s burgeoning middle classes were trafficked into brothels and forced into prostitution.
As her trip draws to an end, Lindsay questions whether the increasing demand for domestic help and consumer goods by India’s wealthy coupled with the increasing poverty in rural India, means there is any solution to this abominable trade.
Perhaps hoping to rebut the attention her own tabloid behavior has taken from her career, Lohan wrote on Twitter on December 9th that "focusing on celebrities and lies is so disconcerting, when we can be changing the world one child at a time…. hope everyone can see that." On Dec. 10, Lohan added that the trip to India was "the most amazing time of my life.”
The documentary, set to air in the spring on BBC3 — the UK public broadcaster’s digital channel — was suddenly announced late last year. Lohan’s one-week trip to India in mid December surprised many who primarily know the actress for her tabloid appearances, bad girl persona and run-ins with the paparazzi.
After a rocky couple of years and several flops, the actress appears to be trying to get her public image and her career back on track with this documentary and three films, including joining Robert DeNiro in Robert Rodriquez’s upcoming "Machete."
"2010 is about moving forward, not backwards. Leaving the bad (people, habbits, and negative energy behind) time to make changes-right!?!? :)" Lohan tweeted from St. Barts on New Year’s Day. On December 30th, the actress wrote “…No boyfriends and the other drama.”
Well, maybe a drama of a very different and activist sort.