In this exclusive clip from the next episode of Apple TV+’s “Slow Horses,” sidelined British spy River Cartwright (Jack Lowden) must think fast when he spots one of Diana Taverner (Kristin Scott Thomas)’s “Dogs” coming for him at the hospital.

He may be stuck at Slough House with the rest of the MI5 screwups, but he proves he can be as resourceful as any field agent when it comes down to it.

The showdown comes after the horrific events of episode three, in which Slough House head Jackson Lamb (Gary Oldman) realizes he and his team of misfits will be left holding a very bloody bag. 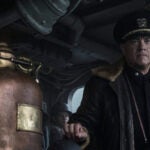 The series, which is based on the novel of the same name by Mick Herron, is produced for Apple TV+ by See-Saw Films and adapted for television by Will Smith (“Veep”). Graham Yost executive produces alongside Smith. Jamie Laurenson, Hakan Kousetta, Iain Canning, Emile Sherman, Gail Mutrux and Douglas Urbanski also serve as executive producers on the series. James Hawes directs all six episodes and executive produces.