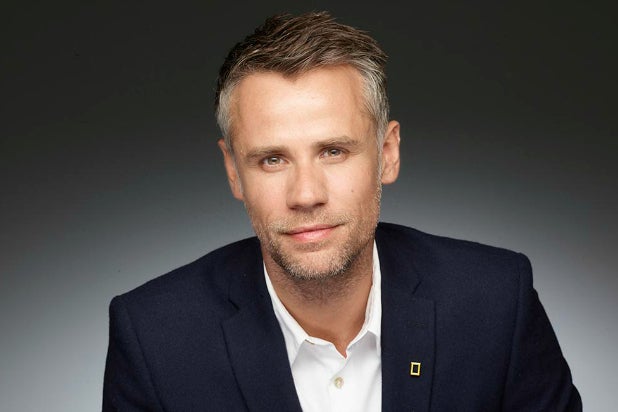 National Geographic Channel has set the creative team and correspondents for the return of “Explorer” this fall, both which TheWrap has learned exclusively.

Lou Wallach, formerly of “The Colbert Report” and “The Talking Dead,” will executive produce the revamped format. Nick McKinney and Meghan O’Hara — creators of The IFC Media Project — will join him as EPs and showrunners.

Also Read: How Nat Geo’s “Missing Dial” May Have Just Solved a Murder

“We feel extremely fortunate to have Lou, Nick and Meghan in place to bring our vision of the new ‘Explorer’ to life,” Tim Pastore, NGC president of original programming and production, said. “We feel confident that together with host Richard Bacon they are creating an insightful, sharp, and above all, an entertaining program unlike anything currently on TV.”

“We have assembled an incredibly talented, experienced and well-respected lineup of correspondents to join our new ‘Explorer’ team,” he continued. “Not only do they bring a mix of uncompromising journalistic experience, comedic flair honed in topical TV environments and filmmaker prowess, they also represent a diverse mix of world views that will push this series to a new level of global storytelling.”

“I could not have asked for a better team to join me in rebooting ‘Explorer,'” Wallach added. “We all feel an awesome amount of responsibility to the brands of the network and series and, with this incredible group of inventive and energized minds, we are creating something truly groundbreaking.”

The new “Explorer” format will blend field packages with commentary from celebrity guests, experts and the correspondents. Filmed before a live studio audience in New York City, “Explorer” will air globally on National Geographic Channel in 171 countries and 45 languages.

Below are more details about the correspondents, all in Nat Geo’s own words.

Bryan Christy
Investigative reporter and National Geographic Fellow Bryan Christy is chief correspondent, special investigations for National Geographic magazine, and was named National Geographic Explorer of the Year in 2014. National Geographic considers his inquiries into international wildlife trafficking to be one of 10 ways the organization has changed the world. Christy is author of “The Lizard King: The True Crimes and Passions of the World’s Greatest Reptile Smugglers.” His reportage has appeared in National Geographic, Foreign Policy and Playboy, among other publications. A frequent public speaker on international crime, the wildlife trade and the power of storytelling, Christy has appeared on CNN, MSNBC, Fox News, NPR and PBS NewsHour. He began his professional career as a lawyer and CPA in Washington, D.C., where he worked on such topics as the U.S.-Japan supercomputer trade, Norwegian whaling and the sale of light-water nuclear reactors to North Korea. Christy’s education includes Pennsylvania State University, the Cornell University Graduate School, the University of Michigan Law School and Tokyo University Law School (where he was a Fulbright Scholar).

Ryan Duffy
Ryan Duffy is a journalist, producer and entrepreneur. As a former correspondent for the Emmy award-winning HBO show “Vice,” Duffy has scaled empty high-rises in China’s ghost towns, been shot on the outskirts of Bogota in a bulletproof velvet coat and traveled to North Korea with Dennis Rodman. He was named to Forbes’ “30 Under 30” list in 2012. He has been a strategic advisor to tech and media startups, overseen video for Derek Jeter’s The Players’ Tribune and executive produced and hosted “Now What,” an AOL/Huffington Post series exploring creative solutions to the world’s biggest problems.

Francesca Fiorentini
Francesca Fiorentini is a journalist, comedy writer and performer. She is a host and producer with AJ+, the online channel of Al Jazeera Media Network. As an independent journalist in Buenos Aires, she covered Latin American social movements and current events for Univision and Red Pepper Magazine. Currently, she can be found performing stand-up to crowds of aspiring Zuckerbergs in comedy venues around the Bay Area.

Jena Friedman
Jena Friedman is a stand-up comedian, writer and filmmaker. She has worked as a field producer at “The Daily Show With Jon Stewart” and has written for “Late Show With David Letterman.” Her work has been featured in Vanity Fair, The Guardian, The Independent, New York Magazine, Vice, Newsweek, Glamour, Time, The Wall Street Journal, Salon, Gawker, Slate, The Huffington Post and Time Out New York and on CBS, TV Land, MSNBC and Comedy Central. When not on tour, Friedman can be seen performing at venues such as The Upright Citizen’s Brigade Theater and The Comedy Cellar in New York. She holds a BA in anthropology from Northwestern University, with a minor in business.

Justin Hall
Justin Hall is an Emmy-nominated documentary filmmaker, broadcaster and journalist. He is a Fellow of the U.K.’s Royal Geographical Society, specializing in hi-tech digital storytelling technologies. He has reported on issues as diverse as illegal wildlife trade, deforestation, gold mining, cocaine production, child slavery and piracy; he has been involved in many adventures, from helicopter raids on cocaine factories in Bolivia to tracking down arms dealers in Moscow, to hitchhiking a ride on a rusty Russian jetfighter. Hall was one of the first explorers to use technology to champion the rights of tribal peoples, in projects dating back almost 20 years. His passion for environmental, cultural and tribal issues was cultivated through his early work with Academy Award-nominated anthropologist and filmmaker Jean Pierre Dutilleux on the series “Tribal Journeys.” An avid storyteller, Hall continues to crisscross the globe, with recent investigations taking him to Sudan, Saudi Arabia, Belize, Borneo, Somalia, Colombia, Democratic Republic of the Congo and three times to Libya. Armed with a smile and good intentions, Hall is not your standard correspondent.

Billie Mintz
Billie Mintz is an award-winning filmmaker who has produced and directed four feature length documentaries, including “Jesus Town, USA” and “The Ponzi Scheme.” His narrative short films and commercials have won the Audience Award at the Brooklyn International Film Festival, the Jurors Award at the Detroit International Film Festival and the Best Film at the Kent Film Festival. Inspired by a three-year apprenticeship with an Inca shaman, after majoring in native studies, Mintz founded the Artists Raising Consciousness Institute, a nonprofit cooperative that assists charities and nongovernment organizations in raising awareness of social issues through the media. For this he was awarded the Toronto Entrepreneur of the Year award for Social Change in 2008.

Tania Rashid
Working as a freelance correspondent in South Asia, Tania Rashid has proven herself a one-woman shop when it comes to journalistic filmmaking for outlets such as Al Jazeera English, Vice News, CNN International and Current TV. Fluent in Hindi, Urdu and Bengali, and with knowledge of Arabic and Spanish, Rashid boasts a lifelong exposure to world cultures. She grew up in Saudi Arabia and was educated in Bangladesh and Utah. She completed her MS degree in broadcast journalism and documentary at Columbia University in New York.

Tim Samuels
Tim Samuels is an award-winning British documentary filmmaker, broadcaster, author and journalist. With extensive experience at the BBC — where he won Young Journalist of the Year, three Royal Television Society awards and best documentary at the World Television Festival — he has created investigative specials and documentaries that have addressed such hard-hitting topics as immigration in the U.K., death row in the U.S. and racism in Northern Ireland. Often deploying a subversive steak in his films, Tim formed the world’s oldest rock group, The Zimmers, to challenge perceptions of the elderly. Heavily involved in the arts, he has regularly presented on BBC Two’s “The Culture Show,” works as a creative director and hosts magazine shows and documentaries across BBC radio. Tim recently published his first book — “Who Stole My Spear? How to Be a Man in the 21st Century” — and contributes to newspapers and magazines, such as GQ and the Guardian.

Baratunde Thurston
Baratunde Thurston is a futurist comedian, writer and cultural critic who helped launch “The Daily Show With Trevor Noah,” co-founded Cultivated Wit and the “About Race” podcast and wrote the New York Times best-seller “How to Be Black.” Thurston is a highly sought-after public speaker, television personality and thought leader who has been part of noteworthy institutions such as Fast Company, TED, the MIT Media Lab and The Onion. He has hosted shows on PBS, Science Channel, Yahoo, AOL, YouTube and Pivot TV. He has a philosophy degree from Harvard University.