Chris Hemsworth teased the sequel to his action hit “Extraction,” as part of Netflix’s TUDUM fan event Saturday, and the follow-up seems to be just as violent and intense as the original.

“Extraction” remains one of the most widely watched and successful films in Netflix’s history. The streamer last July revealed that the Hemsworth film topped a list of its most popular original movies, being viewed by 99 million households in its first four weeks and beating out other popular hits like “Bird Box” and “Spenser Confidential.”

The sequel brings Hemsworth back into the fold as black market mercenary Tyler Rake, and the original’s director Sam Hargrave is also back on board “Extraction 2,” looking to top himself after delivering an impressive 11-minute unbroken take in the first film. 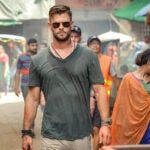 “Avengers” director Joe Russo is writing the “Extraction” sequel, and both Joe and Anthony Russo are producing the film on behalf of their AGBO banner.

The TUDUM event going on Saturday has already unveiled new looks at “Red Notice” with Dwayne Johnson, “The Harder They Fall” with Idris Elba and looks at popular series including “Stranger Things 4” and “Bridgerton.”

Check out Chris Hemsworth and the announcement teaser for “Extraction 2” here and above.