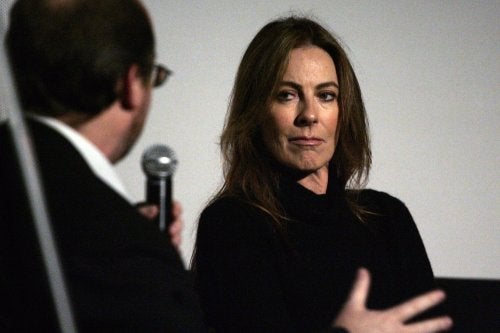 "I’m attracted to stories and characters that find themselves in extreme situations," director Kathryn Bigelow told a capacity crowd at TheWrap’s screening of her war film "The Hurt Locker" on Thursday.

Bigelow’s quest to find a suitable subject to give her a high-octane filmmaking fix brought her to Jordan, where she shot the story of soliders tasked with one of the most dangerous jobs imaginable: defusing a frightening array of makeshift bombs in the midst of the Iraqi insurgence. All told, she spent 44 days in the country and two days filming homefront scenes in Vancouver.

To help her achieve verisimilitude, Bigelow enlisted screenwriter and journalist Mark Boal to journey with her to the Middle East, where he continually fine-tuned the script throughout filming. In Boal, Bigelow found a person who was intimately familiar with the stresses of the job, having been embedded with a bomb squad on assignment from "Playboy."

Shooting mere miles from the Iraqi border helped lend the project an air of authenticity, Bigelow and Boal told the audience at the ArcLight Sherman Oaks during a post-screening Q&A session with TheWrap columnist Steve Pond.

"There was no way we were going to shoot in New Mexico, because it would have looked nothing like what you see in the film," Boal added. "Being that close to Iraq and immersed in the culture of the Middle East gave the movie the immediacy of war."

Because of the close proximity to the battlefield, the director was able to round out the cast with people who felt the effects of the war most directly. She employed Iraqi refugees as extras and in bit parts in several key scenes.

Boal said he was consumed with getting the details right. To do so, he drew heavily on his reporting to create the film’s characters, creating composites of soldiers he met for the thrill-seeking Sgt. James (Jeremy Renner) and the more by-the-book Sgt. Sanborn (Anthony Mackie), whose clashes and contrasting personalities give the film its narrative heft. 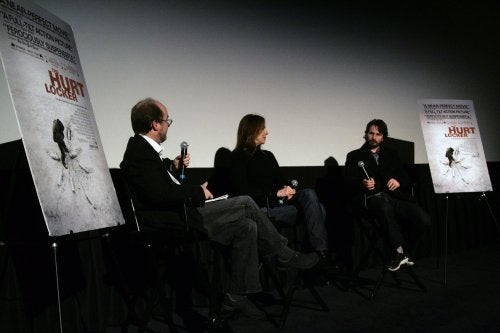 "I saw enough of these kinds of personalities to believably create a character," Boal said. "This job is not for the faint of the heart. It has far and away the highest mortality rate of any job in the army."

As challenging to the filmmakers as the harsh locations and punishing desert sun was the difficulty of making a new kind of war movie — one that built on the great Vietnam movies such as "The Deer Hunter" and "Apocalypse Now" while also acknowledging the characteristics of the current conflict, such as the fact that the army no longer relies on a draft, that make the Iraq War unique.

"I love the Vietnam movies," Boal said. "But with this movie, I wanted to push past those films to capture and share a sense of what this war was like. Hopefully, we were able to create a story that will be around for the test of time."

Boal and Bigelow so enjoyed their collaboration that they’re partnering again on another film that sounds likely to take them to another harsh locale. Entitled "Triple Frontier," the action-adventure will take the duo to the tri-border area between Paraguay, Brazil and Argentina that’s a hotbed of organized crime.

"It’s a very porous border," Bigelow said. "It’s rough. There’s a lot of drugs, crime and all manner of bad things, so it seemed like a good place to set a film."