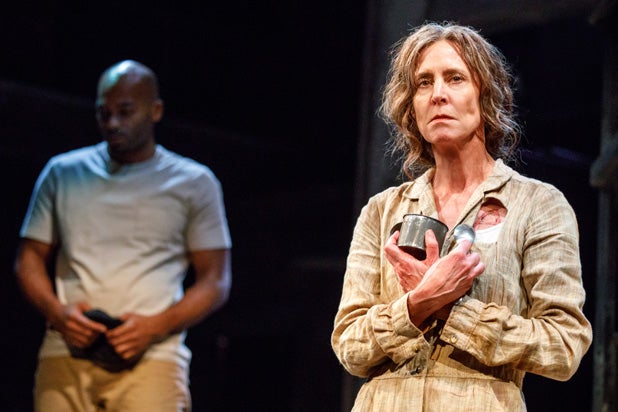 Suzan-Lori Parks has said that the original idea for her play “F—ing A” was something of a joke: “I’m going to write a riff on ‘The Scarlet Letter’ and I’m going to call it ‘F—ing A’!” This was before Parks had won the Pulitzer Prize for her breakout 2002 play “Topdog/Underdog.” More tellingly, it was also before she had even read Nathaniel Hawthorne’s novel.

And like many an idea borne of an ill-informed joke, “F—ing A” doesn’t really sustain itself over its two-hour-plus running time. That’s the takeaway from director Jo Bonney’s occasionally stirring revival, which opened Tuesday at Off Broadway’s Signature Theatre. (Parks’ second Hawthorne-inspired play, “In the Blood,” is due to open next week at the same theater complex.)

While Hawthorne may have been Parks’ jumping-off point — and the heroine is a woman named Hester (Christine Lahti) branded with a red A on the skin above her left breast — the real dramatic inspiration appears to be Bertolt Brecht.

Besides Hester, the other characters have archetypal names like The Mayor (Marc Kudisch), Canary Mary (Joaquina Kalukango), Butcher (Raphael Nash Thompson) and Monster (Brandon Victor Dixon) and function mostly as archetypes in this dystopian fable about how society treats women. (Spoiler alert: badly.)

This Hester is a domestic worker turned abortionist, saving up money to bail her son out of jail. He was incarerated as a boy thanks to the tattletale daughter of her former employer who herself has grown up to be the wealthy but childless First Lady of the land (Elizabeth Stanley). And naturally, she’s the belated target of Hester’s revenge scheme that does not go according to plan.

The plot is intricate and a bit of a mess, with female characters occasionally lapsing into another language called TALK that is projected onto the set in supertitles. (You might think that having a private language would empower these women, enabling them to assert greater autonomy or even spark a revolution, but it seems to only exacerbate their inferior status.)

The action also grinds to a halt every few minutes for one of Parks’ original songs, which do little to advance either the story or its characters. (The cast of nine also plays the accompanying instruments.) While Parks is a truly gifted writer, Kurt Weill she is not.

Occasionally, the feminist agitprop is sublimated beneath some nicely phrased dark humor. Toward the end of the first act, Thompson’s Butcher gets a showy and hilarious monologue about his wayward daughter’s many crimes, which range from prostitution and racketeering to jaywalking and “leading unsuspecting men and women into cyberspace and leaving them there lost and without a roadmap.”

And Lahti, in a role played by S. Epatha Merkerson in the first New York production, in 2003, makes Hester a paragon of both abjectness and steely determination in dire circumstances. But the script, including the abrupt twists of the bloody and tragic climax, keeps letting her down.