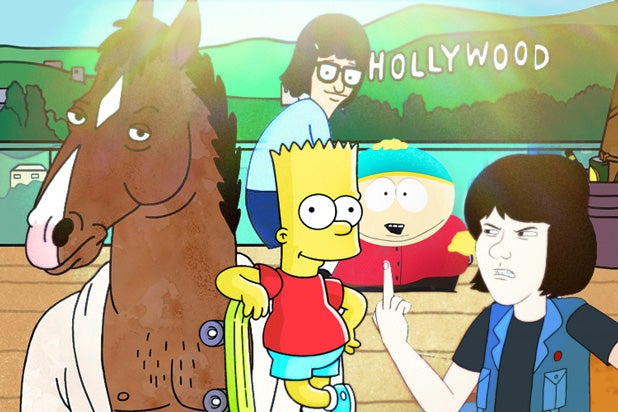 Cartoons aren’t just for kids anymore, and the current state of adult-targeted animation is both big business and top quality. Some of the funniest sitcoms on the small-screen contain no live-action: From Netflix’s “BoJack Horseman” to FX’s “Archer” and Fox’s Bob’s Burgers.

Then, of course, there are the still-strong pioneers, like “The Simpsons,” “South Park,” and “Family Guy.” Certainly the concept of grown-up cartoons isn’t brand-new to the turn of 2016, but to animated comedies aimed at adult audiences are enjoying unprecedented success.

So, why does a genre once meant for children and relegated to Saturday mornings now hold their parents’ attention between 8 and 11 p..m., as well as on-demand? “Bob’s Burgers” creator Loren Bouchard credits it mostly to what he calls “an accident of the medium.” And it’s a happy accident, indeed.

Back in the day, there was only one acceptable reason to pitch your show as an animated one. “The answer you were supposed to give was so you could do crazy stuff that couldn’t happen in real life, and these cutaway jokes that reach the height of absurdity very quickly,” Bouchard told TheWrap.

“I think, actually, the real answer — nowadays especially — is, ‘Because you can have different voices coming out of different faces,” he explained. “You have this incredible flexibility where you can have an adult play a kid, you can have a man play a woman, and so on.”

That allows for totally different points of view than a live-action sitcom could generate, and it definitely makes the “kids” more valuable from a comedic and storytelling standpoint. And that’s not even getting into the potential for animals, aliens and the like.

Another big bonus animation allows is its casting potential. Take a closer look at the credits of your favorite “adult” cartoon next time you tune in.

“It is easier to get people to agree to do voiceovers,” Bouchard explained. “They do not have to go and sit in a trailer and get made up, they do not have to sit around on the set all day or on location.” He added, “You will often get people who you wouldn’t have been able to get otherwise to be a guest star on your TV show, because all it requires of them is maybe an hour of their time.”

Stand-up comic Bill Burr — whose “F is for Family” premieres Friday on Netflix — agreed with that sentiment, though of course, both he and Bouchard have more responsibilities on their respective series than just a little V.O.

“If I was just doing voiceover on it, yeah, it’d be a joke,” Burr, who created and executive produces the show, told TheWrap. “I could do stand-up and possibly have a bit part in another series or maybe do a movie.”

Beyond Burr, that show boasts the vocal talents of Sam Rockwell, Justin Long and Laura Dern, among others.

And despite those big names, animated comedies make economic sense, as they are cheaper to produce than live-action sitcoms — especially those off-broadcast TV. That’s a pretty good starting point, but return-on-investment opportunities goes beyond the budget.

It’s not, however, a guarantee of success. Hulu on Thursday canceled Seth Meyers‘ “The Awesomes” after three seasons, as the service shifts to a strategy more dependent on more expensive premium dramas.

Bouchard touted animation’s “high-level of re-watchability and overseas sale-ability” as something networks — like his Fox — crave. And cartoons also tend to stick around a long time, which has benefits for ownership downstream.

Plus, there’s always the merchandise potential.

In other words, a successful animated show will sell a bunch of t-shirts — and these to a demographic that actually has purchasing power. Optimistically, action figures and video games aren’t out of the question either.

The confluence of all these factors has led to quality of these adult cartoons never being better, and the competition is as stiff as ever from both the new shows and the legacy programs.

“‘South Park’ [has] been doing the best social commentary of the last almost 20 years. That show is incredible,” Burr said. “I watch that show anytime it’s on — if they’re doing like a run of them, I’ll watch like three in a row. I always end up shaking my head — I think those guys are geniuses over there.”

While it took him awhile to see his own effort come to fruition at Netflix — it turned out not to be a fit at Amazon or Adult Swim — Burr believes the final product is worth his six-year investment.

“This is just an incredible time for creative people,” he summed up his animated journey, which began a long time ago with a Comedy Central pass on a failed pilot. “There’s just so many options now, I think they just had to loosen up the reins and let creative people go.”