Actor F. Murray Abraham will not be returning for “Mythic Quest” Season 3, a Lionsgate spokesperson has confirmed to TheWrap.

No details were given surrounding his departure, with the spokesperson adding, “We do not comment on matters concerning personnel.”

Abraham played head writer C.W. Longbottom on the Apple TV+ comedy series, which revolves around a fictional video game studio run by Ian Grimm (Rob McElhenney). Longbottom was a key role on the series, serving as the old-fashioned sci-fi novelist turned video game writer with delusions of grandeur. A Season 2 arc for the series revealed Longbottom’s backstory in flashback form, with Josh Brener filling the role.

In October of last year, “Mythic Quest” was renewed for a third and fourth season, and Longbottom’s story arc didn’t come to a conclusion at the end of Season 2, so Abraham’s departure is a surprise.

Abraham won an Oscar for his role in the 1984 film “Amadeus” and currently fills a key voice role on the Disney+ Marvel series “Moon Knight.” He is also known to fans as super spy Dar Adal in the Showtime series “Homeland.”

Vanity Fair was first to report the news. 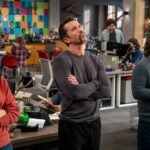