Facebook said on Wednesday it will start banning “severe sexualizing content” that targets public figures and celebrities in an update to its bullying and harassment policies.

According to this update, the company will remove profiles, pages, groups and events that sexualize public figures — which includes celebrities, journalists, politicians and content creators. The content covers photoshopped images, degrading images or drawings and any otherwise degrading content “depicting individuals in the process of bodily functions,” Antigone Davis, Facebook’s global head of safety, wrote.

“We made these changes because attacks like these can weaponize a public figure’s appearance, which is unnecessary and often not related to the work these public figures represent,” Davis said in the post. “We also recognize that becoming a public figure isn’t always a choice, and that this fame can increase the risk of bullying and harassment — particularly if the person comes from an underrepresented community, including women, people of color or the LGBTQ community.” 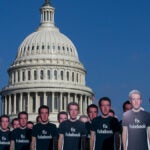 The move comes on the heels of Facebook whistleblower Frances Haugen’s testimony in Congress earlier in October, which has added increasing pressure for regulators to reign in Big Tech and offer more consumer protections — especially when it comes to teens and children. Facebook’s internal research found that Instagram was responsible for 32% of teenage girls on the app feeling bad about their bodies, and they felt worse from using the photo-sharing app.

The revised policy will also cover what Facebook deems coordinated mass harassment, aiming to protect people at greater risk of offline harm. This could include victims of violent tragedies or government dissidents, the company said. Facebook will remove any objectionable content it considers mass harassment toward these individuals in their direct messages, comments or personal profile pages and posts.

State-linked and adversarial network of accounts, pages and groups that harass or silence individuals will also be subject to removal.