“Some of you have reached out seeking guidance regarding fact-checking political speech in anticipation of a potential candidacy announcement from former President Trump,” a Meta manager emailed fact-checkers Tuesday, according to a memo obtained by CNN. The memo reminded staffers “political speech is ineligible for fact-checking. This includes the words a politician says as well as photo, video, or other content that is clearly labeled as created by the politician or their campaign.”

TheWrap was unable to obtain a copy of the memo but a representative for Meta directed us to the company’s long-standing policy on exempting politicians from its third-party fact-checking program.

The reiteration of the company’s existing policy came as Trump was poised to announce his decision to run in 2024.

Though the former president is currently banned from Facebook, Meta Platforms executive Nick Clegg said the platform will consider allowing Trump back on Facebook in January 2023, two years after his initial suspension. 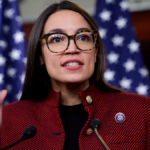 “We define a ‘politician’ as candidates running for office, current office holders – and, by extension, many of their cabinet appointees – along with political parties and their leaders,” the memo continued, concluding that “if former President Trump makes a clear, public announcement that he is running for office, he would be considered a politician under our program policies.”

In the days following the Jan. 6 Capitol riots, Trump was banned from virtually every mainstream social media platform, including Facebook, Instagram and Twitter. Trump is still banned from Facebook, but after he announces a run for president, recreations of his speech on the platform would not be subject to fact-checking.

There has also been recent speculation that new Twitter boss Elon Musk might welcome Trump back onto the platform, though Musk announced in early November that “Twitter will not allow anyone who was de-platformed for violating Twitter rules back on platform until we have a clear process for doing so, which will take at least a few more weeks.”