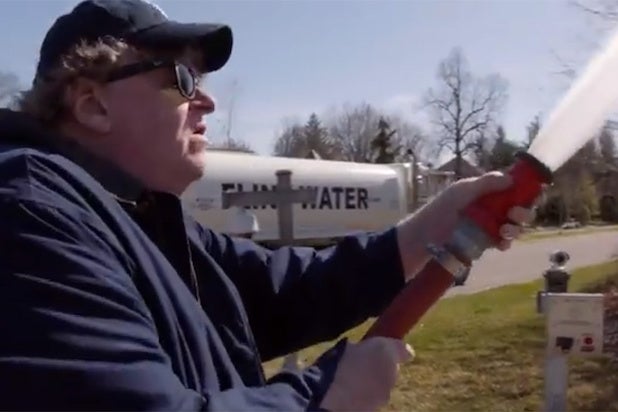 After months of hype from the provocative director, Michael Moore’s anti-Donald Trump polemic “Fahrenheit 11/9” arrived in theaters this weekend. But despite strong reviews from critics and liberal-leaning moviegoers who appreciated Moore’s pull-no-punches take on our current political climate, the film’s box office hasn’t stacked up against Moore’s biggest films.

In an effort to get the film out to the widest audience possible prior to the midterm election in November, “Fahrenheit 11/9” eschewed the traditional steady rollout release most documentaries take in favor of a wide release on 1,719 screens. But while independent trackers pegged the film for a $5-7 million opening, the film only grossed $3.1 million for a per screen average of just over $1,800.

While that opening still ranks in the top 15 highest openings for documentaries, other Moore films that have been released on similar screen numbers have performed better. The largest was the 2004 film “Fahrenheit 9/11,” which opened to $23.9 million on 868 screens and is still the highest grossing documentary of all-time with $119 million domestic.

Part of the film’s struggle may simply be a lack of interest even with some liberals to see a movie about a U.S. president who has dominated the 24-hour news cycle. It certainly isn’t from a general lack of interest to see documentaries, as the summer box office season saw multiple titles like “RBG” and “Won’t You Be My Neighbor?” find success.

“With documentaries, it often just comes down to the subject matter,” said comScore analyst Paul Dergarabedian. “With a film like ‘RBG’ you had a very positive, inspiring story about a Supreme Court Justice, and with so much attention paid to the current political divide, each type of film has to succeed on its own merits while trying to appeal to those beyond its core audience.”

But Steve Bunnell, head of sales for the film’s distributor, Briarcliff Entertainment, is confident the film can still find legs in the weeks between now and the election. He notes that comScore’s PosTrak audience survey reported that 58 percent of opening weekend audiences for Moore’s film said they would “definitely recommend” the film, nearly matching the 59 percent for “Won’t You Be My Neighbor?”

“I think audiences are reacting positively to the fact that Moore isn’t just talking about Trump,” Bunnell told TheWrap. “He also talks about the Democrats and Obama and even has some criticism for them too. I think the people who saw this movie are going to encourage others to see it, and it’s going to become more topical as the election gets closer.”