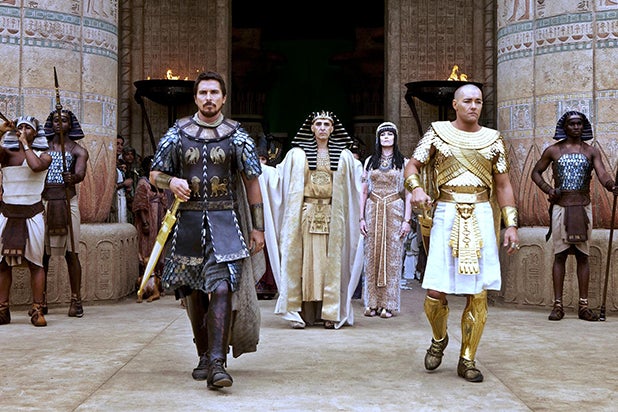 “Exodus: Gods and Kings” won the weekend box-office crown with a $24.5 million debut, but the Biblical epic was crucified on social media in the process.

Despite the backlash, Scott has staunchly defended the drama. When asked to expand on his self-described “careful” casting of the 20th Century Fox film earlier this year, he told Yahoo he knew Bale “was the right actor for the role” of Moses.

Last month, Fox CEO Rupert Murdoch also waded into the debate, questioning what all the fuss was about.

“Moses film attacked on Twitter for all white cast. Since when are Egyptians not white? All I know are,” Murdoch tweeted on Nov. 29.

He immediately came under assault, and fired off more tweets on the subject.

“Everybody-attacks last tweet. Of course Egyptians are Middle Eastern, but far from black. They treated blacks as slaves,” Murdoch tweeted before finally admitting, “Okay, there are many shades of color. Nothing racist about that, so calm down!”

But it seems his call to “calm down” fell on deaf ears. As the film arrived in theaters this weekend, critics took to social media in droves. The Twitter hashtag #BoycottExodusMovie continued to gain steam and it was almost unanimously fueled by hate-filled posts.

Below are some of the most memorable reactions.

Not only did Ridley Scott whitewash #ExodusMovie, but it looks like it's terrible in its own right, too.

#ExodusMovie will be a flop. Barely opened to half of what #Noah did, and that was also a domestic flop. Doesn't pay to bastardize Bible.

#BoycottExodusMovie Maybe next time it won't be so "inconvenient" to cast some people who aren't white as "gods and kings" hm?

Definitely not spending my money on this. #BoycottExodusMovie

Exodus just said to hell with The Bible lol

#BoycottExodusMovie They Put Us In The Back As They Have Always Done Show Subservancy. We Ruled In This Time pic.twitter.com/wSwHa92c81

I never thought biblical figures to have British accents…. Or use bronzer. #ExodusMovie

Instead of #BoycottExodusMovie let's do this #kickstarter for the Winston Churchill movie starring @ForestWhitaker. He's an amazing actor.