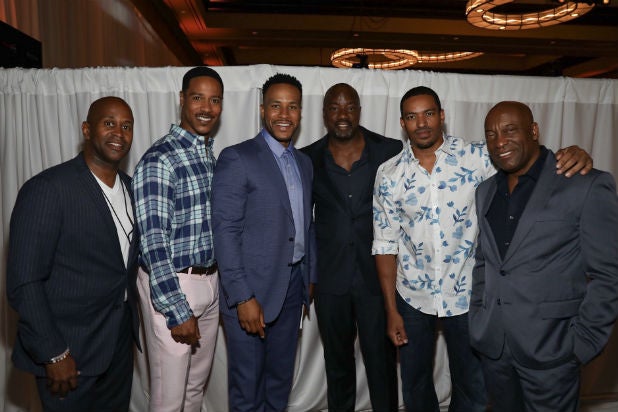 MegaFest, a convention that focuses on the intersection of family and general entertainment, is increasingly carving out a festival home for faith-based and intergenerational Hollywood movies.

For the third year running, the International Faith and Family Film Festival has attracted sleeper hit films that revolve around religion, and the actors and directors that develop and star in them.

For the 2017 edition, hosted in Dallas, Texas earlier this month, the festival recruited the likes of John Singleton — the first African American to be nominated for the Best Director Oscar, for 1991’s “Boyz in the Hood,” and a prolific producer and contributor to the “Fast and the Furious” franchise.

The director sat for on a panel of filmmakers and discussed the current landscape, and why smaller-budgeted projects are finding profits among a devout fan base.

The conversation included (above, from left) Derrick Williams, the EVP of MegaFest founder T.D. Jakes’ eponymous production company; Brian White of “The Family Stone” and “The Cabin in the Woods”; Devon Franklin, producer of the  “Miracles From Heaven”; Malik Yoba (“Why Did I Get Married?”); and Laz Alonso (“Jumping the Broom”).

“It organically fills a content void in what Hollywood is currently producing,” Alonso told TheWrap of the experience.  “It allows faith based-films to be screened by the general public who wish to view inspirational stories and support them.”

While studios venture into the arena with action-driven titles like Paramount’s 2016 remake of “Ben-Hur” that might involve faith, they don’t seem to resonate as deeply as practical and pared-down indies. “Ben-Hur” made roughly $27 million in the U.S. on a $100 million budget.

Franklin’s “Miracles From Heaven” made over $61 million on a $13 million budget. This year the festival screened titles like Renee Zellweger and Greg Kinnear’s “Same Kind of Different as Me” and Faye Dunaway’s “The Case for Christ.”

“It’s not just the Bible belt that turns up for faith events anymore,” Williams told TheWrap, adding that registrants to the festival come from multiple cities in the U.S., the U.K., Australia and China.

“MegaFest offers this faith-based content through films, workshops and programs that ultimately point towards lasting fulfillment,” Williams said. “Hollywood would always be wise to pay attention to what people want, and what we believe they inherently thirst for.”

MegaFest was founded in 2004, and is held biennially. The IFFF has been a part of the program for the last three.