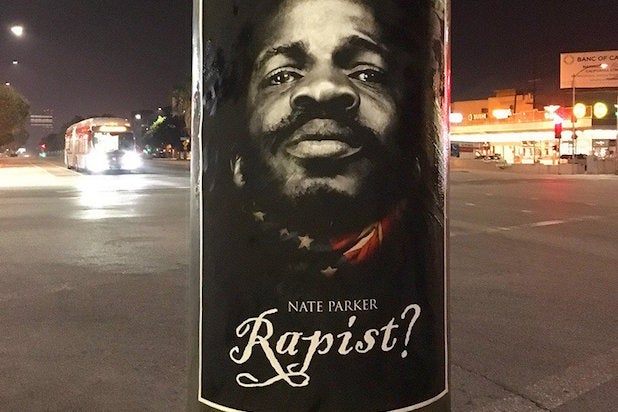 As “The Birth of a Nation” writer, director and star Nate Parker continues to dominate the headlines on Wednesday for a 1999 sexual assault case, altered versions of his upcoming movie’s poster have popped up in Los Angeles.

The posters have been reimagined in PhotoShop by street artist Sabo and feature Parker’s face emblazoned with the word: “Rapist?”

“I wouldn’t normally do something like this but [Parker] pissed me off right off the bat with the trailer and the poster,” Sabo told TheWrap on Wednesday, explaining his motivation to create and post the provocative poster.

The artist said he was provoked by news reports that Parker had been arrested, and later acquitted of sexual assault charges stemming from a 1998 incident while he was a student at Penn State.

Also Read: Nate Parker Rape Accuser's Family Speaks Out: 'These Guys Sucked the Life Out of Her'

Multiple copies of Sabo’s altered version have been plastered all over West L.A., including right outside of the 20th Century Fox studio. Fox Searchlight, which is a part of Fox, is releasing Parker’s well-received indie drama on Oct. 7.

The poster has very clearly been changed from an original version in which Parker appears as the film’s lead character, real-life slave revolt leader Nat Turner, with a noose around his neck made of the American flag.

“I find it very offensive someone is using the flag as a noose,” said Sabo, a Texas-born artist who has been associated with right-leaning politics. He recently produced artwork to promote Dinesh D’Souza‘s anti-Clinton documentary “Hillary’s America: The Secret History of the Democratic Party.”

Sabo, who described himself as “brown,” also expressed his concern that Barack Obama has been fanning the flames of racial discord. “Obama wants to pick up the mantle [of racial division] before he gets out of office,” he told TheWrap, adding that he thinks “black people should stop voting for Democrats.”

Parker said on Tuesday he was “devastated” after news of a 1999 sexual assault case resurfaced during promotion for his upcoming film”The Birth of a Nation,” but insisted that he would not run from his past.

Parker wrote, directed, and produced and starred in the acclaimed film, which the coveted Grand Jury Prize at Sundance and was bought by Fox Searchlight in a historic bidding war this year. As an early awards favorite, 36-year-old Parker has been the subject of recent profiles in which the old rape case was brought up.