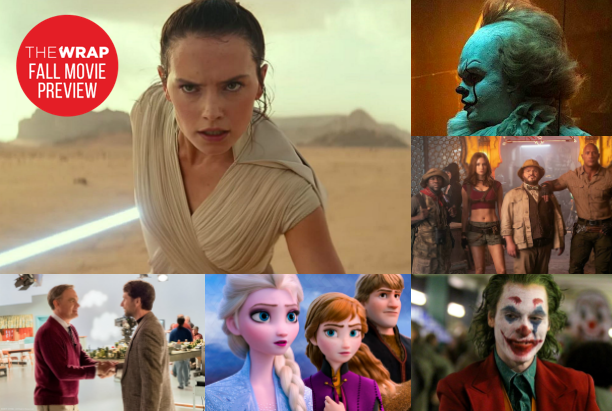 Fox’s Future Under Disney May Hinge on ‘Ford vs. Ferrari’

Despite a strong summer at the domestic box office that nearly matches last year’s, Hollywood has racked up $7.4 billion in ticket sales for 2019 — still 6.4% below the tally by August 25 of last year. That raises the pressure on Hollywood to gross at least $4 billion by year’s end to match last year’s record $11.88 billion total.

But with several of the most successful franchises due in theaters this fall — including “Maleficent: Mistress of Evil,” “Frozen 2,” “”Star Wars: The Rise of Skywalker” from Disney alone — 2019’s final third is showing some of the variety that made 2018 such a successful year.

“There’s highly anticipated titles in horror, family, blockbuster and prestige all over the calendar,” Exhibitor Relations analyst Jeff Bock told TheWrap. “So nearly every weekend there should be strong turnout from at least one major age demographic.”

Disney, which has dominated this year with a whopping 37% market share, looks to continue its domination with three major sequels in the last quarter, starting with October’s “Maleficent: Mistress of Evil,” the sequel to a live-action “Sleeping Beauty” retelling that grossed $241 million in 2014. The animated division’s “Frozen” sequel arrives just before Thanksgiving, while JJ Abrams’ “Star Wars” episode nine lands just before Christmas. Disney’s end-of-year offerings for 2018 were “Ralph Breaks the Internet” and “Mary Poppins Returns,” which combined for $282 million domestic through year’s end. “Frozen II” alone should eclipse that amount.

Sony should score with December’s “Jumanji: The Next Level,” which will try to match the $404 million grossed by “Jumanji: Welcome to the Jungle” two years ago. The studio is so confident in the sequel that it is releasing the film two weeks before “Star Wars,” a stark contrast to when studios steered very clear of “The Force Awakens” in 2015.

“The success of films like ‘Jumanji’ means that other studios aren’t afraid of ‘Star Wars’ anymore,” Bock said. “And that’s a good thing. ‘Star Wars’ will be ‘Star Wars,’ but having other major blockbusters to keep families coming back more than once during the holidays is only going to be a positive.”

There will also be opportunities for other non-Disney films to achieve $100 million-plus opening weekends throughout the fall. The first will be Warner Bros./New Line’s “It: Chapter Two,” which could pass the first “It” as the most successful horror film of all time if it tops that movie’s $123 million opening.

The October slate likely won’t provide the one-two punch that Sony’s “Venom” and Warner Bros.’ “A Star Is Born” brought last year, but will see Warner Bros. get another chance at success with the highly anticipated “Joker,” which will first premiere in Toronto next month.

If both “Joker” and “It: Chapter Two” perform well, Warner will get an R-rated rebound following a tough year in which none of the studio’s release have crossed $500 million worldwide. The studio’s fall would get even better if their November horror offering, the “Shining” sequel “Doctor Sleep,” is able to stand out in a crowded market.

There’s also a possibility for some surprise hits during the fall and holiday season, with Bock pointing to Lionsgate’s Rian Johnson murder mystery “Knives Out” and Universal’s potential Oscar contender “Queen & Slim.” Sitting between “Frozen II” and “Jumanji” on the release schedule, both movies could get squeezed out by the bigger blockbusters. But strong word of mouth and marketing of stars like Chris Evans and Daniel Kaluuya could help these two late November pieces leg out well.

Sony also looks to have a strong fall with two big Oscar-bait offerings: Marielle Heller’s “A Beautiful Day in the Neighborhood” and Greta Gerwig’s “Little Women.” The cast of both films will be the main draw, with Tom Hanks playing Fred Rogers in “Neighborhood” while an all-star cast led by Saoirse Ronan, Meryl Streep and Emma Watson will be featured in “Little Women.” And Disney’s Fox division has its own starry prestige play with “Ford v. Ferrari” starring Christian Bale and Matt Damon.

And then there’s the art-house scene, which after an intermittent summer will see the floodgates open this fall. In September, Warner’s “The Goldfinch” and Focus’ “Downton Abbey” will kick off a fall that also includes Neon’s release of Palme D’Or winner “Parasite,” Fox Searchlight’s Taika Waititi satire “Jojo Rabbit,” A24’s horror film “The Lighthouse” and Universal’s wide Christmas release of the WWI film “1917.”

Another potential box office hit is Martin Scorsese’s mob drama “The Irishman” starring a digitally de-aged Robert De Niro and Al Pacino — assuming that Netflix can win over streaming-averse theater chains and book the film in a significant number of screens nationwide to make a dent in ticket sales.