We’re now more than halfway through this year’s network dog-and-pony show, as far as the broadcast networks are concerned, with ABC, NBC and Fox rolling out their schedules earlier this week, and CBS the CW are set to officially unfurl their wares on Wednesday and Thursday.
Here’s what we know so far:

THE "A" IS FOR AMBITION
The network went three-for-four last fall in its attempt to ambitiously fill its two-hour Wednesday comedy block chasm with all-new shows (Kelsey Grammer vehicle “Hank” was the only one that didn’t make it).
Maybe the Disney-owned network can get that kind of lucky again.
The network will need more sweeping success this fall, with the level of attrition – particularly on the drama side – very high.
Gone will be the venerable “Lost,” the highly hoped for “FlashForward” and the midseason flounderer “Happy Town,” just to name a few hour-longs. 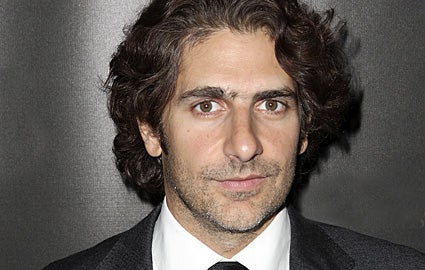 The scrappy “Forgotten” and well-worn “Ugly Betty” also will need replacing. "Eastwick," meanwhile, never had a chance.
Of the nine new pilot orders, six are dramas. (Here’s ABC’s fall schedule.)
The biggest challenges this past season have been Tuesday and Wednesday nights, where freshman dramas "The Forgotten" and "Eastwick" failed this year to keep up with CBS procedurals. "Flash Forward" also left a big crater on Thursday night when it didn’t work out.
ABC is attaching the situation by carpet-bombing its week-night schedule with a wide assortment of drama.
At 8 p.m. on Tuesdays, ABC has slotted the "Incredibles"-esque "No Ordinary Family" — a superhero-themed hour-long starring "The Shield’s" Michael Chiklis — where it will counter-program against Fox’s burgeoning enemble hit "Glee."
On Tuesday at 10, ABC has the new Michael Imperioli (pictured) crime dramedy "Detroit 1-8-7" up against CBS’ suddenly vulnerable "CSI: Miami" and NBC’s recently launched "Parenthood."
With 2009 comedy launches "The Middle," "Modern Family" and "Cougar Town" all clicking on Wednesday night, ABC will plug in a hole at 8:30 with the new Shana Goldberg-Meehan ("Joey") relationship comedy "Better Together."
And at 10 p.m., ABC has Jerry Bruckheimer in the same awkward postion NBC has placed him — making his new legal procedural “The Whole Truth,” starring former "Numb3rs" lead man Rob Morrow, competing against his CBS "CSI" franchise ("CSI: NY"). "Whole Truth" will also have to go up against NBC’s new "Law and Order: Los Angeles" spin-off.
Meanwhile, the surprise floundering of "FlashForward" — the network’s most anticipated launch last year outside of "Modern Family" — leaves a hole open for the ensemble docu-style dramedy "My Generation." ABC officials believe the famale-skewing show will be more compatible with its lead-out, "Grey’s Anatomy."
On Friday nights this past season, the network’s decision to put the young-female-skewing "Ugly Betty" at 10 p.m. didn’t work out for anybody.
This time around, the network is hoping that Dana Delany procedural "Body of Proof" (Delany plays a medical examiner in this one) will better appeal to the 35-plus crowd at 9 p.m. on Friday.
The network is importing former Fox reality show "Secret Millionaire" — it’s similar to CBS hit "Undercover Boss" in theme and actually did quite well for Fox — to lead into it at 8 p.m.
Meanwhile, waiting in the mid-season wings will be new medical drama "Off the Map" from Shonda Rhimes, new Matthew Perry comedy "Mr. Sunshine" (he plays a cynical sports agent) and new relationship comedy "Happy Endings."
Sci-fi series "V" will also make its return in November, and there’s speculation that ABC might pick up CBS cancellations "New Adventures of Old Christine" and "Ghost Whisperer."

CBS: WITH 7 SERIES WHACKED, HOLES ARE APLENTY
The network was unsentimental an unceremonious in cleaning out its veterans — a purge that not only included foregone conclusions like aging procedurals "Cold Case" and "Numbers," but also bubble comedies like "The New Adventures of Old Christine" and "Gary Unmarried."
Newer kids like 2009 launches "Accidentally on Purpose" and "Miami Medical," meanwhile, got caught in the bloodshed, too.
Throw in Friday-night paranormal hour-long "Ghost Whisperer," and suddenly, a very stable CBS schedule has a ton of holes in it.
We’ll start with the comedies.
The loss of Jenna Elfman sitcom "Accidentally" — which has to be disappointing, given that it got off to a good start last fall — will leave a slot open on Monday night.
The most likely fill-in candidate seems to be “Mike and Molly” from “Two and a Half Men”/“Big Bang Theory” creator Chuck Lorre. Starring Swoosie Kurtz, the show will focus on a couple battling their food issues. Journeyman big-man actor Billy Gardell will co-star. 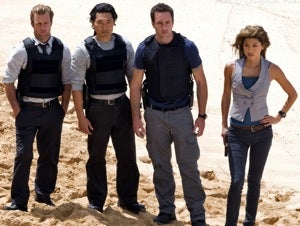 Also joining the network’s comedy lineup will be Twitter phenomenon adaption “$#*! My Dad Says,” with William Shatner playing the paternal role and “Will and Grace” creator David Kohan enlisted to help out with the script.
When CBS announces its schedule Thursday, look for the network to move one of its veteran Monday-night shows ("How I Met Your Mother" maybe?) to 8 p.m. on Wednesday to anchor that night’s one-hour comedy block.
In terms of hour-longs, the network has already ordered its much anticipated remake of “Hawaii Five-O” (pictured above) with J.Lo’s "Back-Up Plan" co-star Alex O’Loughlin – a veteran star of short-lived CBS series, including “Moonlight” and this past season’s even shorter-lived “Three Rivers” — set to play Det. Steve McGarrett.
Other cop shows joining the line-up include a “Criminal Minds” spin-off starring Forest Whitaker, and the multi-generational Irish-American law-enforcers-themed “Blue Bloods,” starring Tom Selleck and Donnie Wahlberg.
Also competing for a 10 p.m. slot will be “Defenders,” which will star James Belushi as a Vegas defense attorney. Documentarian Davis Guggenheim and former “CSI” showrunner Carol Mendelsohn will executive produce.
Other CBS drama pilots include Brett Ratner-produced spy thriller “Chaos” and an as-of-yet-untitled John Wells-produced medical drama.

NETWORK LOOKS TO REBOUND FROM ’09 DISAPPOINTMENTS
Despite all its good prospects, the women 18-34-targeted network’s fall 2009 class badly underperformed, starting with the Ashton Kutcher-produced “Beautiful Life,” which was DOA.
Sure, “Vampire Diaries” worked out, but “Melrose Place” was also a major disappointment – not even proven ratings mercenary Heather Locklear could help it – and the network finally confirmed its cancellation on Tuesday.
Meanwhile, anticipated mid-season launch “Life Unexpected” also produced unanticipated ratings malaise (CW officials, who love it, have decided to stick by the series for now).
The network will begin filling in the hour-long holes with two new series that were confirmed Tuesday.
The Warner Bros. Television-produced “Nikita” stars “Mission Impossible III” martial arts chick Maggie Q as a government-agency operative. Craig Silverstein executive produces, along with the “Chuck”-producing trio of Danny Cannon, McG and Peter Johnson.
Also confirmed to the schedule is “Hellcats,” which is about a struggling pre-law student (Aly Michalka) who reluctantly pays for the books and tuition by signing up for the cheerleading team. Kevin Murphy (“Desperate Housewives”), Tom Welling (“Smallville”) and Allan Arkush (“Heroes”) are the executive producers.

FEW CHANGES FOR THE NO. 1 NETWORK
Fox will maintain the most stable lineup among the Big Four this upfront.
The major of renovations are tweaks, really: “American Idol’s” Tuesday night show has been expanded from an hour to 90 minutes, with the Wednesday-night results show reduced to half an hour. (Here’s Fox’s full fall schedule.)
“Glee,” meanwhile, will start the fall moved back an hour to 8 p.m. on Wednesday, kicking off a new comedy block that will include the Mitch Hurwitz-created “Running Wilde,” which will star “Felicity” herself, Keri Russell; and “Raising Hope” from “My Name Is Earl” mastermind Gregory Garcia. Relationship comedy “Mixed Signals” from newcomer Adir Miller is the third one.
Fox has never had huge success launching comedies outside Sunday night, so doing three in one season should be challenging.
Drama-wise, attrition was minimal this year, with “Dollhouse” and “Past Life” among the few casualties.
Hour-long orders include the “Dallas”-inspired “Lonestar” and the Shawn Ryan cop show “Ride Along,” both of which will share the Monday 9 p.m. slot – formally occupied by “24” – that leads out of “House.” “Ride Along” will be introduced mid-season.
Also ordered was the Steven Spielberg-produced sci-fi drama “Terra Nova.”
“We don’t want to tie it into a date,” Reilly said. “We want to do this show right.”

"MARGIN" NETWORK ON AMBITIOUS MARCH
Currently in the process of re-entering the 10 o’clock business, and trying to fill a lot of other holes, too, the word “overhaul” doesn’t seem to do justice to what NBC will be undergoing next fall. (Here’s NBC’s complete fall schedule.)
A year removed from Jeff Zucker’s disastrous "managing for margins" 10 o’clock strategy, the last-place network will debut six new hour-longs and one new half-hour comedy on its fall schedule.
The renovation starts on Monday night, with the long-moribund “Heroes” finally exiting the 9 p.m. slot. “Chuck,” which saw its 18-49 numbers steadily decline to under 2.3 this year, will once again somehow re-appear at 8 p.m. — sans the Subway campaign that saved it last year, but still benefiting from its staggering ratio of fan bloggers to viewers, which has to be 1:3 at least.
At 9 p.m., NBC will slot in conspiracy-thriller “The Event,” which stars Jason Ritter as an average guy who stumbles into a vast government conspiracy that not even the president himself (Blair Underwood) is aware of. The competitive outlook looks decent, with Fox’s “24” away.
At 10 p.m. on Monday, NBC — just as ABC did — will put producer Jerry Bruckheimer in the position of competing with himself, with his new procedural “The Chase” going up against his CBS show “CSI: Miami.” Produced by Jennifer Johnson, “Chase” stars “Past Life’s” Keli Giddish as a tough-as-nails, cowboy-hat-wearing U.S. Marshall. As HitFix put, it sounds like a combination of USA’s “In Plain Sight” and FX’s “Justified.”
Tuesday night remains stable for NBC, with successful midseason replacement “Parenthood” remaining at 10 p.m. to follow two hours of “The Biggest Loser.”
But Wednesday night features the network’s biggest rebuilding project of all, with two new hour-longs bookending survivor “Law & Order: SVU” at 9 p.m.
At 8, NBC will schedule new J.J. Abrams spy drama “The Undercovers” in the same slot ABC put the producer’s “Lost” in back in 2004 – and hope for results at least half as good.
At 10, new spin-off “Law & Order: Los Angeles” (or, “LOLA” is people inclined to say “Coco” phrase it) will try to compete for the procedural audience with CBS’ powerful “CSI: New York.” Shelved will be freshman hospital drama "Mercy," which flirted with survival for much of the season.
Among other major moves, NBC will rejigger its Thursday-night comedy block, moving Tina Fey’s Emmy-beloved-yet-viewer-starved “30 Rock” back to 8:30, and placing “Outsourced” – a workplace comedy from “Office” producer Ken Kwapis – at 9:30, leading out of “The Office.”
“Parks & Recreation” has been moved back to midseason – a move Jeff Gaspin, chairman of NBC Universal Television Entertainment insisted, that will not disrupt its “momentum.”
In other NBC highlights, Conan O’Brien is officially back in business with the network, serving as an executive producer on new Friday-night Jimmy Smits drama “Outlaw” (which is about a former Supreme Court justice who goes rogue to do some good).