Following the FBI’s raid on Mar-a-Lago this week, it was revealed that the warrant the feds executed was obtained after an informant was able to identify what classified documents twice-impeached former president Trump had and where they were kept. Jimmy Fallon had a few guesses Wednesday night on who that informant was.

According to Newsweek, the search of Trump’s resort “was deliberately timed to occur when the former president was away” and was “based largely” on the information from that currently anonymous informant. On Tuesday night, Fallon lightly implied that it was former vice president Mike Pence who had given the FBI the password to Trump’s safe, which he claimed was also taken. 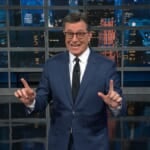 Also Read:
Colbert Says FBI’s Trump Raid Is Like Christmas: ‘We All Got the Present We Wanted’ (Video)

But the next night, Fallon had a few more concrete guesses. Up first was the man who has previously gotten himself and others into trouble with a phone call.

The “Tonight Show” host was of course referring to the time that Giuliani butt dialed an NBC reporter, and ended up leaving a voicemail in which he was heard trashing the Biden family and talking about his financial woes. And no, that wasn’t the first time Giuliani had butt dialed someone.

Of course, Fallon did have a second guess at who the FBI tipster might’ve been – and this time, it was someone even closer to Trump’s inner circle.

“Yup, no one knows who it is, but Eric just started wearing a pin that says ‘FBI’s Little Helper,'” he said.

You can watch Fallon’s full “Tonight Show” monologue in the video above. 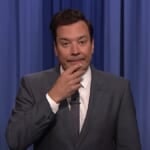