Jimmy Fallon is pretty sure he knows why Trump took a group of colleagues out onto his golf course without any clubs this week. On Tuesday’s episode of “The Tonight Show,” the late night host joked that it was actually an excavation party, meant to dig up more classified documents that Trump had buried.

On Monday, the twice-impeached former president was photographed at his Virginia golf course, accompanied by several men, all seemingly dressed for golf. But none of them appeared to be wearing golf shoes and also, not one of them had clubs. The picture quickly drew mockery online, with many poking fun at the idea that Trump simply wanted to be seen. But Fallon had another guess.

“Trump was like ‘So I think I buried the documents somewhere around here, so start digging, boys!'” he joked. “Yeah, Trump was smart! He was like ‘How about nine of us meet on the green with no clubs, so it doesn’t look suspicious?'”

The “Tonight Show” host also poked fun at the photo itself, honing in on the similar appearance of every man in it. 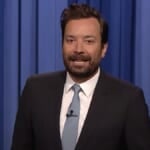 Also Read:
Fallon Mocks Trump for Asking Government to Pay for Special Master: ‘Bring in a Special Master to Decide Who Has to Pay’ (Video)

“Looks like backstage at a fashion show for Marshall’s,” Fallon mocked. “Look at that. Very diverse group, they had polo shirts of every color.”

Elsewhere in the monologue, Fallon returned to Trump’s classified documents, citing a story this week that reported the National Archives still doesn’t know if they have recovered all the presidential records that Trump took from the White House. And at that, Fallon was gobsmacked.

“Amazing. Somehow my library knows I’ve had a copy of ‘Goodnight Moon’ for 40 years, but we still can’t track down these documents,” he marveled.