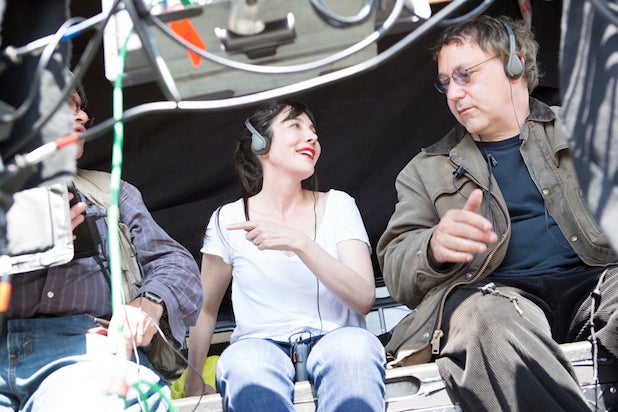 What happens when a world-famous director plays wingman to his wife’s first directing project?

We asked Sam Raimi (“Spider-Man”) and Gillian Greene (wife-and-director) when they stopped by TheWrap office for an exclusive talk about Greene’s filmmaking debut, “Murder of a Cat,” which opened in specialty release this weekend. The comedy stars Fran Kranz (“The Cabin in the Woods”) as a socially awkward young adult with a dead cat in his life, with a supporting cast including JK Simmons, Blythe Danner and Greg Kinnear.

Sharon Waxman: How did this project come about?
Gillian Greene: I found it on the Blacklist [a list of unproduced screenplays], and I had just made a short film. I loved it.  I met with the writers (Christian Magalhaes and Robert Snow) and persuaded them to let me direct it.

How did you find the financing?
CAA really found the financing. Molly Hassell the producer introduced us to Ivan Orlic, a Peruvian billionaire and he loved the script.

Tell us what it’s about…
Fran Kranz is a guy who’s 28 years old, lives with his mom and he’s a loner. Some might call him a loser. His best friend is this cat, Mauser, and Mauser is murdered one day. The local sheriff JK Simmons, won’t help solve the crime. So Clinton, played by Fran Kranz, takes the law into his own hands. It’s a mixture of genres. It’s funny, noir, a mystery, coming of age.

You’re used to being on sets, right? Your father was the actor Lorne Greene, and with all of Sam’s films, I presume?
Yes, I was comfortable. It was challenging. But I had the best time. It was the best experience in the world. I loved it.  I hope I find another project I’m as passionate about.

Sam, what was your role in this?
Sam Raimi: The real producing was done by Molly Hassell. I gave Gillian moral support. I gave her advice on how to approach storyboards, but they were all her shots and her design.

GG:  Honestly, I had to figure it out on my own. He was shooting “Oz the Great and Powerful” when I was doing storyboards, so he didn’t have time.
SR: I visited the set three times, saw her cut, when she asked for notes. Some of which she took, some of which she didn’t.
GG: He came to set one day, and said, ‘You’re losing the light, you should shoot the scene like this.’ And I said, ‘No I want to shoot it like that.’
SR: She threw me off the set.  When I would disagree with her and I was insistent she threw me off the set.
GG: I’d see him talking to Greg, talking to Fran. And I’d say, ‘What are you doing? I’m just going through the scene with the actors.’ I’d say, ‘You’re not the director. This is really embarrassing. You need to not be on the set.’ And he left. And that was a hard decision. I wanted him there. I wanted his help. At the same time, I still have to be the director. It comes naturally to him. I could easily sit back.

Have you always wanted to direct?
GG: No, I never wanted to direct. I made a 50th birthday video for Sam, it was 40 minutes. I got every movie star in Hollywood. We have James Franco, Quentin Tarantino, Joel and Ethan Coen, Russell Crowe — I just went around with my camera…

Is it funny?
SR: They’re all pretty funny.

(To Sam): Do you have any idea how intimidating it must be for Gillian to direct with you as her husband?
SR: No, I hope I don’t intimidate her.
GG: He makes it look easy. It’s probably why I had the courage to do it. I thought, ‘I could do this.’ I realized on this film what a great filmmaker he is. He has an answer to everything. He’s a real pro.
SR: Thank you.
GG: Well, we’re married, working together professionally.
SR: I think it’s best you made it on your own. It’s a healthy approach.

Sam, you have a wife that’s filmmaker, a son (Lorne) that’s a filmmaker, what’s going on here?
SR: I’m happy they’re pursuing things they love.
GG: He’ll always be the master.
SR: It’s not a competition. It’s a craft, I’ve had a chance to practice it.
GG: We all want to follow in your footsteps.
SR: I think Gillian and Lorne are both exposed to the beauty of the craft of filmmaking, it’s so attractive. If you get an insight into it, you can’t help but be attracted.

So what is next for you?
SR: I’m writing with my brother. I don’t know my next project. I’m looking for a good script. Just something with good stories, good characters — any size would be fine.