The Danish drama “A Family” and the teen-magicians documentary “Make Believe” have won the top jury prizes at the Los Angeles Film Festival.

The short films “My Invisible Friend,” “The Lucky One” and “The Wonder Hospital” won awards in the narrative, documentary and animation categories, respectively.

The two feature-film awards carry unrestricted $50,000 grants to the winning directors.  This year, said an emotional Yeldham, the festival could not secure sponsorship for the grants, so the Film Independent board of directors voted to dip into the nonprofit organization’s coffers to fund the awards. 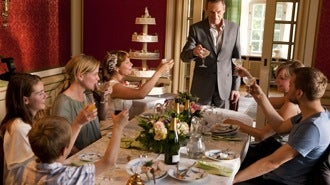 Pernille Fischer Christensen, the director of “A Family” (right) was in Denmark and could not attend the awards presentation.  She sent a statement thanking the festival and calling her film “a story about how important it is to live until you die.”

Documentary director J. Clay Tweel was clearly astonished to win the doc competition for his film about a group of teenaged magicians competing at the World Magic Seminar in Las Vegas.  “I have no idea what to say,” he told the audience at Chaya.  “I did not even think about this.”

Accepting the award on behalf of his ensemble cast, “Hello Lonesome” director Adam Reid thanked his actors “for showing up on set and realizing that I was just a guy with a video camera, and still giving it their all.”

More than 200 feature films, shorts and music videos are screening during the 11-day festival, which comes to an end on Sunday. Many of the highest-profile films, including opening-night film “The Kids Are All Right” and the gala selections “Cyrus,” “Revolucion” and “Waiting for ‘Superman,’” were not eligible for the jury prizes.

Nine films competed for the narrative prize, and another nine in the documentary category.  More than 30 shorts were presented in five different programs.

The LAFF audience awards will be announced on Sunday, before the festival-closing screening of “Despicable Me.”