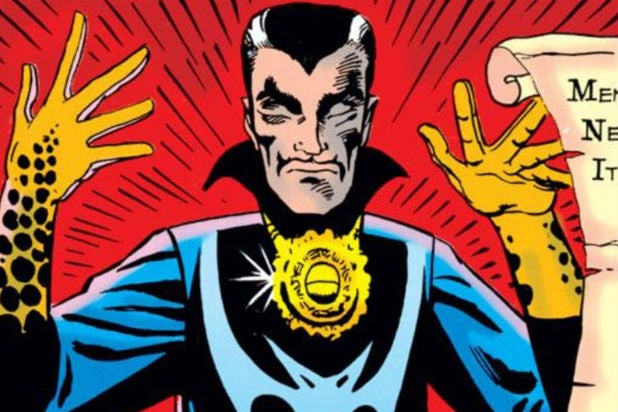 The comics world mourned one of the last living legends of comics’ Silver Age with the news of Steve Ditko’s death. The writer-artist co-created “Spider-Man,” “Doctor Strange,” “The Question,” and many more.

Through a career that spanned more than six decades, Ditko’s trippy art and uncompromising ideas influenced generations of comics writers and artists and made publishers and movie studios rich. Though he died in June, at 90, news of his death didn’t come until Friday. Fans and former colleagues came out in force on social media to say goodbye.

One tribute came from his former employer, Marvel, home of “Spider-Man” and “Doctor Strange.”

Today, the Marvel family mourns the loss of Steve Ditko. Steve transformed the industry and the Marvel Universe, and his legacy will never be forgotten. Our thoughts are with his family, loved ones, and fans during this sad time. https://t.co/uKKR9oClqg pic.twitter.com/1ovYnE8Y2V

Another cane from DC, where he created The Question.

Steve Ditko was one of the most amazing creators in the history of comics, and showed us there is a hero in all of us. Our hearts go out to his loved ones, and everyone who knew him. pic.twitter.com/ukvuA7odF5

Creators weighed in too, including Brian Michael Bendis, who created “Ultimate Spider-Man.”

I spoke to Steve ditko on the phone once. I’ve talked about it often. I got to thank him for creating Spider-man and putting food on my table. I hope he really heard me

Sad to hear of the passing of the legendary artist and creator Steve Ditko. Beloved for generations– his work was the Quirky to Kirby's Majesty and helped provide the early visual vocabulary in counterpoint to Kirby's power and influence. 1/3 pic.twitter.com/GvH8Mcrxg6

Steve Ditko has caught the last web out across the city into the mystic. An early influence on my work, I met Steve exactly once many years ago for a few moments in the Marvel offices. Getting to shake his hand was a privilege. Thanks for all the lovely work, Steve. Godspeed. pic.twitter.com/gOsdFdJa92

I had heard rumours, hoped they were not true. Thank you Steve Ditko, for making my childhood weirder, and thank you @wossy for taking me with you when we went in search of Steve Ditko, and found him. A kind man, who gave me comics. https://t.co/SnBGneZgLx

Steve Ditko was true to his own ideals. He saw things his own way, and he gave us ways of seeing that were unique. Often copied. Never equalled. I know I'm a different person because he was in the world. pic.twitter.com/2GFSA86Btj

In which @wossy and I get to meet and talk to Ditko. One of the best days of my life. https://t.co/Ay5hvn8Ogf

Marvel and DC heavy hitter Gail Simone said Ditko had a unique way of illustrating the small and weak.

He did his best with desperate characters. Kirby excelled at drawing bigger than life, Ditko was best with the small man, the weak man.

But even his superheroes had that feeling of need. His best Spider-man tales showed Peter at his most troubled and afraid and human.

I can’t imagine the Marvel Universe without him. He was the guy playing all minor chords at the symphony.

Gerry Dugan, known for his work on “Deadpool” and “Doctor Strange” comics, had recently been revisiting Ditko’s work.

The uncompromising and brilliant Steve Ditko is gone. Here's my favorite image of him: trapped in an ink bottle between his two iconic collaborations. pic.twitter.com/R75q4yv9i5

I wrote Ditko on and off for a while. I was just going back and re-reading a few – his description of life also happens to be some of the key ingredients in great comics. pic.twitter.com/8bUxnU33r7

Goodbye, Steve Ditko, and thanks for everything, you weird legend. What strange and amazing things you achieved. pic.twitter.com/xIGOExiCYt

Filmmakers influenced by him weighed in too, like Scott Derrickson, who directed 2016’s live action “Doctor Strange”:

RIP to comic book legend Steve Ditko, beyond influential on countless planes of existence. He never truly profited from his comic creations that have lasted for decades, but his work will never be forgotten. pic.twitter.com/UBZQWpF79i

But Gaiman and “Deadpool” creator Rob Leifeld pretty much summed it up:

Without Steve Ditko there would have been no Spider-Man, no Doctor Strange, no Creeper, no Hawk and Dove, none of the black and white reprint comics I read in seaside resorts as a boy. No The Question (which means no Rorschach). No Mister A. No mystery.