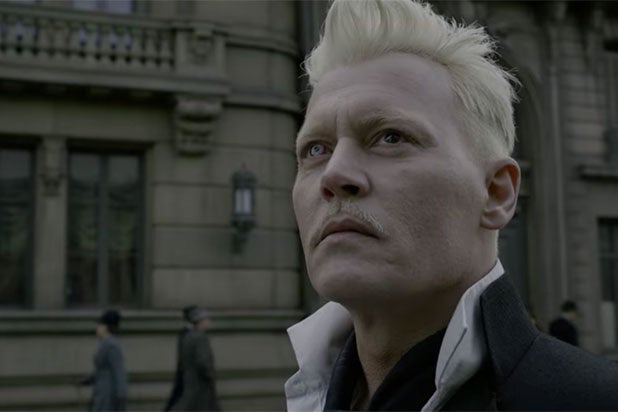 Over the past month, films like “Venom” and “Bohemian Rhapsody” have found big bucks at the box office despite tepid reviews from critics. Now, Warner Bros. is hoping the trend will continue this weekend with “Fantastic Beasts: The Crimes of Grindelwald,” which will try to prove that the Harry Potter prequel series has achieved critic-proof status.

Though the film currently has a 57 percent Rotten Tomatoes score, “Fantastic Beasts 2” isn’t expected to have a much lower opening than its 2016 predecessor, which had a 74 percent RT score. The sequel is currently projected for an opening in the high $60 million range from 4,000+ screens, with estimates topping out at $73 million. By comparison, the first film, “Fantastic Beasts and Where to Find Them,” opened to $74.4 million, grossing $234 million domestically and $814 million worldwide.

Like Spider-Man and Queen fans, Pottermaniacs are expected to turn out for this film no matter what. Perhaps a sign of the film’s unshakeable interest among hardcore fans came at San Diego Comic-Con, when Johnny Depp appeared in full costume as the evil wizard Gellert Grindelwald to reveal the film’s trailer during WB’s Hall H presentation.

Depp appeared at the presentation at the same time that his ex-wife Amber Heard, who has accused Depp of domestic violence, was present to promote another upcoming WB blockbuster, “Aquaman.” While Depp’s appearance at the presentation and his role in the film have earned criticism from online fans and #MeToo activists, he was met with cheers at the presentation, and the accusations leveled against him aren’t expected to divert families with kids and teens who enjoyed the first “Fantastic Beasts.”

For Warner Bros., success with “Fantastic Beasts” and “Aquaman” would be a big exclamation point on what has been a stunning 2018 for them. The studio has already grossed $1.47 billion domestically this year without the help of their most prominent blockbuster franchises from DC Films. With DC looking to get back on track after the disappointment of “Justice League,” and J.K. Rowling’s Wizarding World hoping to get audiences to buy into a five-film “Fantastic Beasts” saga, success for either one of these films could mean big things for WB in 2019 and beyond.

“Fantastic Beasts: The Crimes of Grindelwald” picks up two years after the events of the last film, as Grindelwald calls upon the wizarding world to rise up and assert its dominance over the non-magical human race. Standing in his way is his former Hogwarts classmate and future headmaster Albus Dumbledore (Jude Law), with the reluctant help of Dumbledore’s former student, Newt Scamander (Eddie Redmayne).

Also opening in theaters this weekend is the critically-acclaimed “Widows,” the first feature film from director Steve McQueen since winning the Best Picture Oscar for “12 Years a Slave.” Unlike “Fantastic Beasts,” this heist film, about the widows of four robbers who finish a job their husbands started, has earned rave reviews. It currently has a score of 95 percent on Rotten Tomatoes.

With a reported $40 million budget, a mid-teens opening isn’t exactly an ideal start for a film Fox hopes will get major awards consideration. But with its thrilling heist sequence and unflinching look at political corruption, the studio will look for word of mouth to spread among older audiences looking for more thought-provoking fare. If it does, “Widows” could find its niche on the wide release slate and leg out through Thanksgiving weekend and into December.

Finally, there’s the Paramount comedy “Instant Family,” which stars Mark Wahlberg and Rose Byrne as a couple who adopts three children, including a rebellious 15-year-old. Paramount is projecting a $15-20 million opening from 3,258 screens. The film, which is directed by Sean Anders, does not currently have a Rotten Tomatoes score.