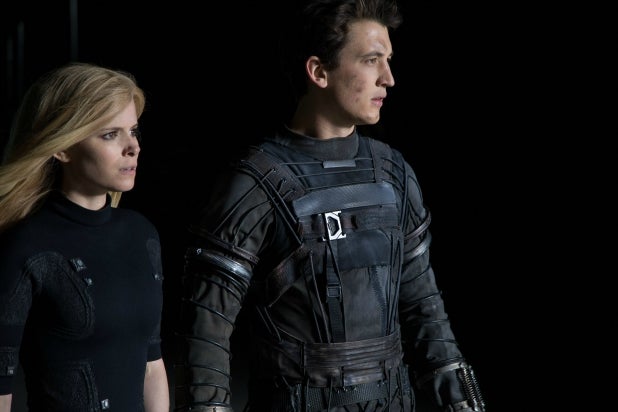 It’s one thing for a movie to leave you wanting a sequel and quite another to make you wish you were watching that sequel instead. “Fantastic Four” — the second attempt by Fox and the third by Hollywood in general to bring Marvel Comics’ popular superteam to the big screen — offers glimmers of good things to come in its final moments, but only after the audience has slogged through yet another dispiriting origin story and yet another Earth-rescuing battle in a bland, CG-created nowhere land.

Director Josh Trank, whose debut feature “Chronicle” put a smart new spin on superhero tropes, has assembled a quartet of engaging, charismatic performers and stranded them in a miasma of exposition and set-up that sinks the movie. So much time is spent putting the pieces on the board that there’s barely any time to play with them.

In 2007, boy genius Reed Richards (Owen Judge) tries creating a teleportation device with the help of his best friend Ben Grimm (Evan Hannemann), whose family junkyard makes a great source of spare parts. They teleport a toy car to parts unknown, with only some sand and rocks returning in its place. Seven years later, teenage Reed (Miles Teller) and Ben (Jamie Bell) repeat the experiment at a school science fair; this time their object comes back, although somewhat the worse for wear.

Their teacher scoffs at the device as a magic trick, but it attracts the attention of Dr. Franklin Storm (Reg E. Cathey from “House of Cards,” all gravelly gravitas) and his adopted daughter Sue (Kate Mara), who have been pursuing similar research. That sand, they inform Reed, comes not from some other location on Earth but from another dimension. Dr. Storm gets Reed a full scholarship at the Baxter Institute so that they can complete a larger version of the teleporter.

Joining them in the lab is Victor Von Doom (Toby Kebbell, “Dawn of the Planet of the Apes”), a sulky-loner genius, and Johnny Storm (Michael B. Jordan), Franklin’s hot-headed but brilliant son, who would rather drag-race than bend the laws of time and space. They succeed at teleporting a chimp to the other dimension, known as “Planet Zero,” and back, but when Baxter higher-up Dr. Allen (Tim Blake Nelson) makes noises about handing the tech over to NASA, Victor, Johnny and Reed decide that they, and not some glory-hogging astronaut, should be the first to make the leap, and Reed insists that Ben join them.

So yes — Sue doesn’t even get to go in the spaceship this time. And at this point, we’re only about a third of a way into the plot, which also involves Mountain-Dew-CGI-lava energy from Planet Zero, the military using our heroes for the superpowers they gain from the dimensional leap, Reed going fugitive, and Victor transmogrifying into a destroyer of worlds.

Once we get to the inevitable showdown — rubber-limbed Reed, disappearing Sue, pyrotechnic Johnny and rock-covered Ben versus metal-encased, energy-manipulating Victor — it’s too little, too late. The big finale, for all its inevitability, at least offers some hope of excitement, but by that time, it’s all too easy to have checked out of “Fantastic Four.”

If the screenplay by Trank, Simon Kinberg (“X-Men: Days of Future Past”) and Jeremy Slater (“The Lazarus Effect”) wanted to eschew superheroics in favor of character development, they wound up bringing neither to the table; it’s only the inherent charm of the lead actors that make these otherwise archetypal cardboard characters of any interest. The first half of “Fantastic Four,” with its bright junior scientists and their shadowy, nefarious backers, calls to mind the ’80s comedy “Real Genius,” only without any of the humor or charm or eccentricity. That was a movie that knew how to make smart young people delightfully odd and unique; the ones we get here are randomly assigned one or two personality traits each. (If that — poor Ben spends much of the film off-screen and un-commented-upon.)

Also Read: Josh Trank Explains Why He Left 'Star Wars' Spinoff: 'I Want to Do Something Original'

Not helping matters is the sheer ugliness of the final battlefield; the digital fakery is so very obvious that it’s difficult to engage with their surroundings as an actual place. To its credit, the movie does a fine job of portraying Reed’s stretching, Ben’s craggy body and Sue’s force field. (Johnny, alas, suffers from having a very cartoony face when his flames are on.)

With all this tedious Tinkertoy origin-story business out of the way, there could certainly be some entertaining “Fantastic Four” adventures in the future with this ensemble. Whether or not audiences will want to gamble another 100 minutes of their lives on subsequent chapters, however, is another matter entirely.